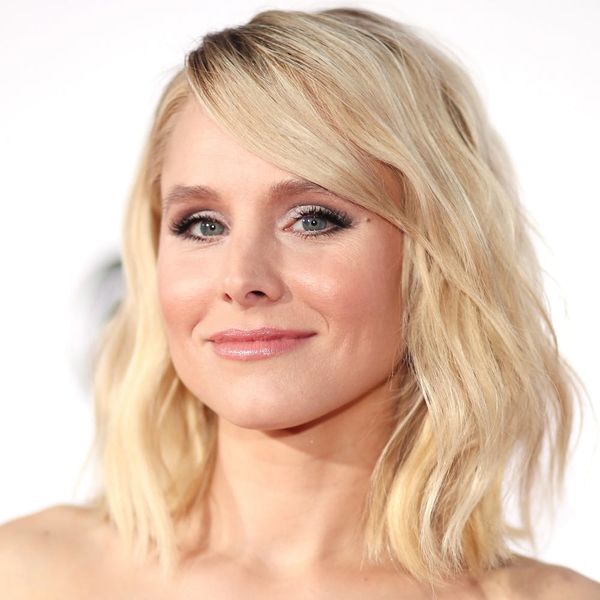 Ah, the prom — the (hopefully) fairy-tale climax of what some have called “the best four years of our lives.” That was surely the case for the young man who wound up with Kylie Jenner as his date this year, and yet another who gained internet fame with his clever La La Land promposal to Emma Stone, who sadly, had to work (though she did send him a handwritten letter and a boutonniere and corsage in her stead).

It was also surely the case for the young woman who was just promposed to on Jimmy Kimmel Live! with a little help from one Miss Kristen Bell.

While filling in on host duty for the regular late night funnyman on Thursday night, the 36-year-old actress dusted off her Frozen vocal chords to help a high school student named Michael pop the big question to his classmate Sarah.

After sending Sarah on scavenger hunt dubbed “The Fast and the Frozenest,” for which she was dressed like Anna (Bell’s character in the film) and sent out into the streets of LA to find “Kristoff” in exchange for a prize, Bell let the audience in on the fact that Kristoff was actually the young woman’s classmate, dressed up to surprise her and ask her for her hand in prom.

@KristenAnnieBell helps a high school student with a surprise #promposal... *LINK IN BIO*

Upon their return, Bell instructs Michael to pull off his mask and tell her the truth. “Sarah, there’s something I wanted to ask you, but I don’t know the words, so Kristen Bell is going to help me,” he says.

Bell then begins to sing to the tune of “Do You Want to Build a Snowman,” albeit with a few, erm, lyrical revisions. “Do you want to be his prom date?” she croons. “Michael wants so much for you to go, because if you say no, he’ll have to take his mom.”

It’s not the first time Bell has reprised her role as Anna — last October, she emulated her own character voice to leave a voicemail for a little girl battling cancer.

With a speechless Sarah eventually saying yes, it looks like she’s just made make that two more dreams come true. How sweet!

Check out the stint in full below:

Do you have an awesome promposal story? Tell us about it over @BritandCo!

From Your Site Articles
Nicole Briese
Nicole is the weekend editor for Brit + Co who loves bringing you all the latest buzz. When she's not busy typing away into the wee hours, you can usually find her canoodling with her fur babies, rooting around in a bookstore, or rocking out at a concert of some sort (Guns N' Roses forever!). Check out all her latest musings and past work at nicolebjean.com.
Celebrity News
More From Celebrity News