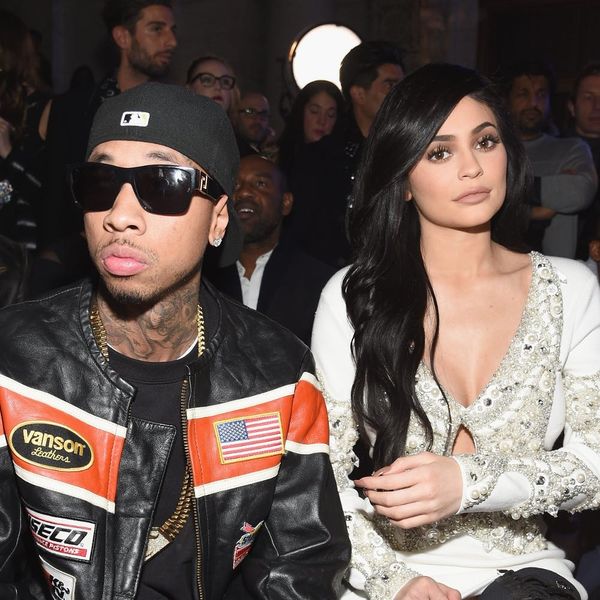 Kylie Jenner and Tyga may have one of Hollywood’s most notorious on-again/off-again relationships right now, but it looks like the drama hasn’t simmered with these two. That’s because, despite the young Jenner sibling reportedly hanging out with a new fella at Coachella (who just happens to be her sister’s ex), it now turns out that Kylie and Tyga had an awkwardly sad run-in this weekend.

Running into your ex post-breakup is never easy, especially when the split is still fresh and feelings may be more than a little raw. That’s why, when Kylie Jenner apparently ran into Tyga this past weekend at Coachella, a source revealed that the pair not only “shared an awkward hug,” but also, “Kylie looked really sad as she walked away.” Oof.

And she wasn’t the only one feeling the awkwardness. Apparently, when Kylie’s rumored new bae, Travis Scott, joined Kendrick Lamar onstage to perform “Goosebumps,” Tyga wanted nothing to do with it. “Once Kendrick went on stage, Tyga and his crew were escorted to the front of the stage to watch the performance,” said an onlooker. But when Travis hit the stage, “a bodyguard began pushing through the crowd with a flashlight to get Tyga and his friends away from the stage.”

And if you were wondering if Tyga was just done with Lamar’s set, it turns out that, “after Travis exited the stage, Tyga emerged on the side nearest the fence to begin watching again.” Sounds like the rapper wasn’t keen on watching his ex-lady’s new fella in the spotlight.

As they say: Breakin’ up is hard to do.

Have you ever had an awkward run-in with an ex? Let us know @BritandCo!

Desiree O
Desirée O is a ‘Professional Bohemian’ who loves anything and everything related to the arts, entertainment, and pop culture. She ADORES being a ‘Newsy’ for Brit + Co, covering all of the latest tidbits of awesomeness that you want to read about. When she’s not writing, she’s either making messy art, going on long adventurous walks with her camera, or poking around over at bohemianizm (http://www.bohemianizm.com/). You can find out about Desirée O and her work at http://DesireeO.com/ or follow her on Twitter @DesireeO.
Coachella
Celebrity News
Coachella Kardashians Kylie Jenner
More From Celebrity News