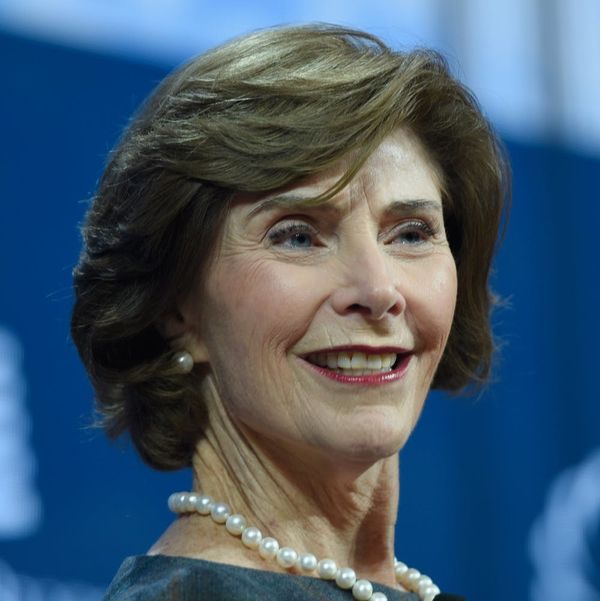 Decried by immigrant communities and activists as racist and inhumane, the Trump administration’s “zero tolerance” policy against illegal immigration has come under particularly harsh scrutiny in the past few weeks amid mounting reports of immigrant family separations at the US border. Public outcry has led some unexpected voices to speak out against the policy, including former First Lady Laura Bush.

Bush wrote an op-ed for the Washington Post on Sunday evening, in which she stated that as someone who lives in a border state, she understands the need to enforce international boundaries. “But,” she goes on, “this zero-tolerance policy is cruel. It is immoral. And it breaks my heart.”

But there’s something very relevant to Bush’s own experience in the White House that is missing from her piece: the fact that her husband, George W. Bush, created the Immigration and Customs Enforcement (ICE) agency, the branch of the Department of Homeland Security that has been criticized for its aggressive raids and arrests since the Trump administration took office.

Following the attack on the Twin Towers in New York City and the Pentagon in Washington DC on September 11, 2001, President Bush worked with Congress to implement a number of “anti-terrorism” laws. In 2002, he signed the Homeland Security Act, which created the Department of Homeland Security. DHS reorganized several other government agencies and the created ICE.

ICE brands itself as an agency responsible for protecting the nation’s borders and arresting undocumented people who have broken the law. In reality, ICE arrests undocumented people even if they haven’t committed any crimes, surveils immigrant communities, and inflicts a wide array of abuses against undocumented detainees, including a pattern of reported sexual assault. ICE is a key component in the chain of deportation.

When it comes to cruelly ripping families apart and endangering the lives of immigrants, the Trump administration does not have a monopoly. Even before Bush and the creation of ICE, the Clinton administration carried out more than 12 million deportations, according to the Migration Policy Institute.

The Bush administration oversaw more than 10 million deportations, more than 8 million of which were apprehensions at the US-Mexico border. Bush also implemented a policy of “catch and release” for undocumented immigrants, a dehumanizing term for a policy that ultimately led to deportation.

Under the Obama administration, the second administration to oversee the DHS, there were more than 5 million deportations and more than 3 million apprehensions at the southern border. The Obama administration also arrested and detained immigrant families and deported parents who were forced to leave their children behind. President Obama also held immigrant children on military bases. Though Obama marketed himself as friendly to immigrants — he oversaw the implementation of the DACA program, whose fate remains uncertain under Trump — the reality is that Obama also expanded upon Bush’s practices.

I just went into the #Juarez Valley for the @TexasTribune to make photos, behind the border fence, of the #immigrant children who have been placed inside the new #tentcity at the CPB facility in #Tornillo. #BorderStories #OnAssignment pic.twitter.com/JmMevp4FUI

Now with Trump in office, the threat to undocumented immigrants (and some naturalized citizens) is escalating. Compared to Obama’s last year in office, deportations rose during Trump’s first year in office, as did arrests made by ICE. Immigrant children are also being forcibly held in detention centers, including a new so-called “tent city” in Tornillo, Texas. This comes after Trump and many Republicans have also committed themselves to repealing DACA and ended TPS protections for Hondurans, Haitians, Salvadorans, and Nepalis. These are just some of the escalating anti-immigration policies the Trump administration has enacted.

All of these policies stem from decades of contemporary immigration policies that are unfair, inhumane, and dangerous to immigrants. Separating children from their parents, arresting and detaining innocent people, and deporting them to countries where they are in imminent physical danger is indeed cruel. But these practices are not unique to the Trump era, and Laura Bush knows it. That she didn’t hold her husband and decades of conservative lawmakers accountable for facilitating these human rights atrocities says a lot more than her condemnation of Trump.

What’s clear is that immigrant communities — who have always spoken out about abuses against them regardless of who has held office — are being torn apart, detained, deported, and abused. The US has been detaining children for no reason other than that they are immigrants for years. These are imminent issues that we have a responsibility to correct, but in so doing, we can not erase a history of harm.

Elizabeth King
Elizabeth King is a politics, history, and culture writer based in the Twin Cities. She is generally pretty cranky but still enjoys traveling, music from the early 2000's, and plotting the resistance. Feel free to say hi on Twitter at @ekingc or check out some of her work at www.elizabethcking.com.
Immigration
Current Events
Immigration Politics
More From Current Events