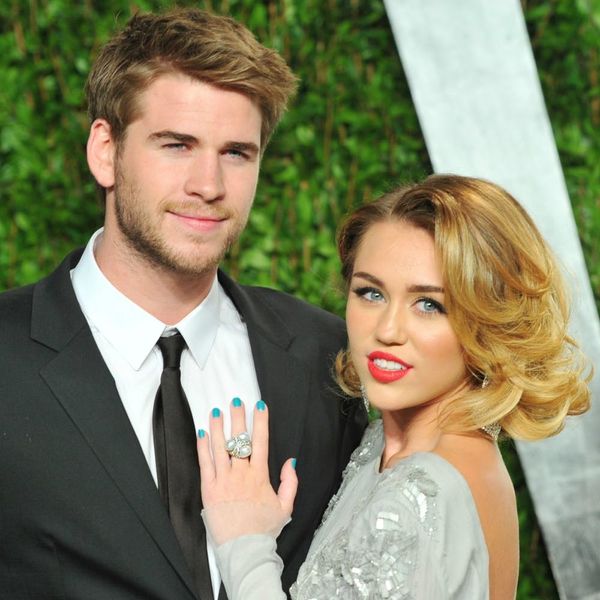 Miley Cyrus recently drove us all bonkers when she teased her possible marital status by proudly sporting a Hemsworth jersey: Are they (gasp!) married? Can they just tell us already?!

Though Liam still refuses to address the current rumors, the 26-year-old Australian hunk broke his vow of silence with Australian News Corp with regard to the couple’s past to give us yet another clue. (Kinda.’ Sorta.’)

When questioned about his decision to get engaged at the tender age of 22 (Miley was just 19), Hemsworth offered up this brief but perfectly worded response: “I don’t think that was impulsive. That was a well thought-out idea.”

According to the interviewer, “The actor’s tone suggests that that’s about as far as he wants to go with this subject.” Hmmm. Could this mean that Liam isn’t exactly in favor of spontaneous acts when it comes to the sacred act of marriage?

We’re not entirely sure, but it’s pretty cute regardless: Guy clearly loves him some Miley.

If they HAVEN’T already eloped, it seems like their dreamy Australian beach wedding plans are coming along quite nicely, anyway: Here’s hoping we get a sneak peek inside their nuptials (whenever they may happen). Knowing Miley, there’s bound to be a non-traditional wedding dress involved, and that we can’t WAIT to see!

Do you think Miley and Liam are married? Tweet us @BritandCo.