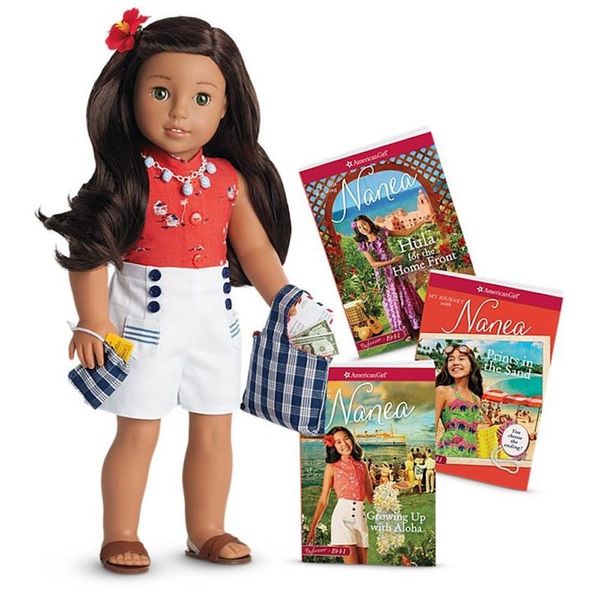 It’s been a pretty groundbreaking year for American Girl. In 2017 alone, the brand has introduced its first American Boy doll with Logan Everett and debuted Melody Eillison, the first Korean-American doll in its lineup. With several months to go before the year is through, the beloved company proved it still has a trick or two up its sleeve with the introduction of one Miss Nanea Mitchell ($115): a Hawaiian-American girl doll living in the 1940s during the time of Pearl Harbor.

Nanea made her big debut over on Instagram, where the company invited customers to “discover the many inspirations and influences for her world — the food, the music, the styles, and most of all, the Hawaiian values.”

While there was one Hawaiian doll who came before her, it’s the first time fans will be able to purchase a doll of Hawaiian descent since 2011, when Kanani was retired after just one year.

Nanea debuts tomorrow! Discover the many inspirations and influences for her world—the food, the music, the styles, and, most of all, the Hawaiian values. Link in bio for full video. 🌺

Newbie Nanea is also unique in that her story tells the tale of living author Dorinda Makanaonalani Nicholson, who wrote the Newbery Honor Award winning Pearl Harbor Child: A Child’s View of Pearl Harbor from Attack to Peace about her own experiences growing up in Oahu at the time of the fatal World War II attack. “Because I went through the bombing and lived in the middle of the harbor through all of it at about the same age as Nanea, they asked me to be an advisor and I was thrilled,” Nicholson told TODAY.

It’s an important mark in the American Girl legacy, as one employee explains in Nanea’s introductory video. “We take pride in telling stories authentically and correctly and making sure that we talk to the experts about everything that we do to make sure that we’re being honest and true and also creating things that are fun,” she said.

That means a historically accurate story line, costume (in addition to her button-down shorts, Nanea also has a Holoku dress ($34) and Hula outfit ($36), for instance), and accessories.

“We hope Nanea’s powerful story of resilience, responsibility to others, and contributing for the common good — or kokua, as it’s known in Hawaii —will resonate with girls and show them they have the power within to face obstacles that come their way,” American Girl President Katy Dickson said in the official press release.

What’s more, if you donate to the American Red Cross through Nanea’s page (scroll down to see dollar amounts), American Girl will match your donation up to $75,000 through December 31 to help provide comfort and care to military members in need, as well as their families, in addition to $575,000 worth of merchandise in the form of its signature 18-inch dolls.

Fans can also enter the Nanea Island Inspiration Sweepstakes by September 30 for a chance to win a trip for four to Oahu.

Welcome to the AG family, Nanea!

What do you think of Nanea? Share with us @BritandCo.

Nicole Briese
Nicole is the weekend editor for Brit + Co who loves bringing you all the latest buzz. When she's not busy typing away into the wee hours, you can usually find her canoodling with her fur babies, rooting around in a bookstore, or rocking out at a concert of some sort (Guns N' Roses forever!). Check out all her latest musings and past work at nicolebjean.com.
toys
Pop Culture
toys
More From Pop Culture