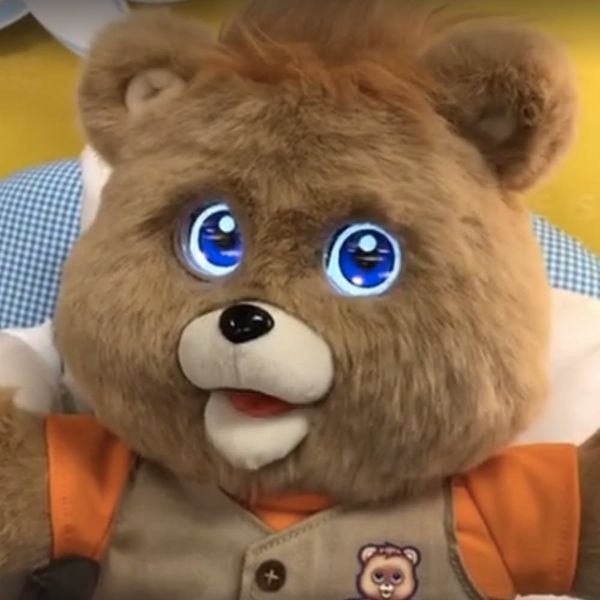 If you love 1980s and 1990s nostalgia (perhaps you’re currently busy planning the ultimate ’80s-themed Halloween bash?), we may have just found the perfect gift for you! No, we’re not talking about that crazy gold-plated Walkman retailing for $3,680 nor our fave ’90s snacks. This is something BETTER. Waaaay better.

Teddy Ruxpin, one of the first animatronic toys to ever take the world by storm, was a huge hit when he first appeared on the scene back in 1985, and now, he’s BACK and better (and more technologically advanced) than ever!

Originally, Teddy wowed — and terrified — kids with his avant-garde motorized eyes and mouth as he told stories powered by the cassette player found in his back. (Oof — it’s been a while since we’ve heard talk of cassettes!)

Now, Teddy 2.0, who is being brought back to life by Wicked Cool Toys (the makers of the new Cabbage Patch Kids), is about to unleash his charm (and crazy eyes!) on a whole new generation.

Although he won’t be available for sale until next July (buying your own Teddy will set you back $99), a prototype was recently revealed at the Dallas Toy Fair, and the Mommy and Gracie Show managed to capture it all in a YouTube video that shows exactly what we can expect from the reboot.

The biggest, most show-stopping update has to be Teddy’s eyes. The LCD creations feature 40 different expressions, including hearts and even snowflakes. His little motorized mouth is also back, except this time you won’t need any cassettes, as Teddy has been upgraded with a 4GB drive that can store up to 40 stories.

The 14-inch tall Teddy will come with 10 pre-loaded stories, each one 15 to 20 minutes long, but others will be available for purchase via the accompanying app. (Because of course there’s an app!) Some other changes will include the ability to push Teddy’s paw to skip to the next story and press his cute, cuddly foot to start a singalong.

Cute or creepy: What do you think of the new Teddy Ruxpin? Tweet us @BritandCo.

Barbara Pavone
Barbara Pavone is a pop culture-obsessed writer based in beautiful (but ridiculously cold) Montreal, Canada. When she's not working, she's sipping on a Pimm's Cup and daydreaming about her celebrity hero, Saint West.
toys
Pop Culture
toys
More From Pop Culture