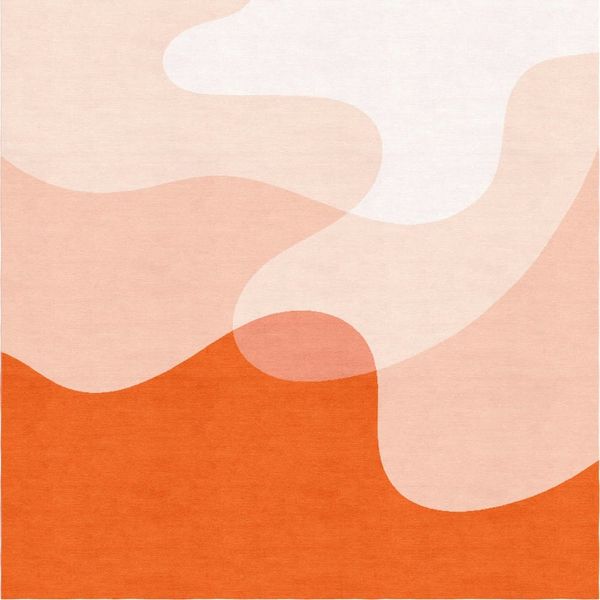 If you’ve spent the past few months obsessing over those Fyre Festival documentaries, you’re probably already familiar with Oren Aks, the former creative director of the doomed event and creator of the social media campaign that set the festival’s ill-fated hype in motion. But what you probably *didn’t* know about him is what he’s been working on since the cameras were turned off. Well, we’re here to answer that question, and it’s probably the last thing you’d ever expect: He’s designing a collection of recycled rugs.

Aks is one of many designers and artists whose limited-edition work is being showcased in a new collection called UNWASTED by Knot Collective. Each rug in the collection is made from more than 3,000 recycled water bottles, and proceeds from the sales benefit Goodweave, an organization that helps children escape childhood slavery and other unsafe living conditions. But the social impact of the rugs isn’t the only reason to like them. While Aks’ designs are cheery and versatile, some of the other styles — which range from artist Asia Pietrzyk‘s edgy anatomical scenes to Lesley Barnes‘ funky faux-animal skins — are pretty wild.

We’d be lying if we said this is what we expected Aks to be doing after the whole Fyre failure, but on the other hand, did anything about that saga go as anticipated? Maybe Aks’ biggest strength is keeping us all guessing. The UNWASTED rugs are available now from Knot Collective starting at $1,174.

RELATED: What Really Burns About The New FYRE Festival Details

Emily Bihl
Emily Bihl is a freelance writer and sometimes-songwriter currently undoing a lifetime of healthy eating in the great city of New Orleans. When she’s not writing, she can be found covered in clay at the ceramics studio or attempting an approximated downward dog. She likes her black labrador Selkie, unexpected anagrams, and cracking the sugar on creme brûlée with the back of a spoon.
decor
Home News
decor Goods Home Collaboration Home Decor Rug
More From Home News