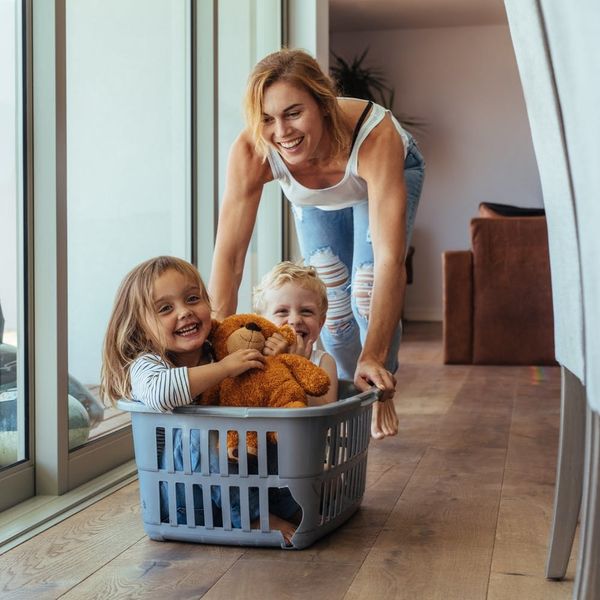 Part of being a mama is learning on the job. And often, our best support system is fellow parents who are in our postpartum support tribe. Whether you need tips for traveling with a baby for the first time or ways to keep your whole fam healthy during cold season, asking moms and dads who have been there can be so helpful (and time-saving!).

As the executive producer and creator of the popular parenting podcast, The Longest Shortest Time, Hillary Frank asked her audience in a blog post if they had any weird parenting wins born out of pure desperation. Frank loved what she learned, like a dad who pig-snorted in his baby’s ear to calm her down, and compiled some hilarious and heartfelt hacks into a book called Weird Parenting Wins. Frank’s own personal win? “I tell my daughter if she’s gonna whine, she has to sing the blues.” Here, Frank picks some of her favorite tips from her book.

1. Use food coloring for potty training. Transitioning from diapers to the potty can be a bit overwhelming and messy. Frank loves this idea from a mom who found that her son would rather pee in his diaper than the potty. The mom told him he might like to make “goblin pee.” She added one drop of blue food coloring, telling him if he peed on it, it would turn green and become “goblin pee.” Boom! Potty trained.

2. Cultivate adventurous eaters with some clever ideas. Most parents deal with picky eaters despite their best efforts. Here are some suggestions from the Weird Parenting Wins stories: Cut strips of frozen chopped spinach as a tasty frozen treat for teething kiddos. Hold a “crunch contest” with raw carrots and award points for each crunch. One dad uses a tiny medicine cup for dispensing milk to his daughter, calling it “tiny milk.” Transform yourself into the Costco Sample Lady by laying out samples of food on plates with toothpicks and small containers for messier foods, if your kiddo is always curious to try anything at Costco.

3. Bring non-inflated balloons with you. If you’re stuck at an airport with a baby or toddler, stuff a few non-inflated balloons in your carry-on. When your wiggly little needs some play time, inflate the balloon and let him or her bat it around and play with it. This tip comes from a mom in Wisconsin.

4. Try your kitchen appliances for a fussy baby. After a dad in New Jersey heard from a friend that the whir of a dishwasher soothed his baby, he decided to test run each kitchen appliance with his daughter until he landed on the white noise of the fan above the oven that helped lull his baby to sleep.

5. Minimize toy mess with a magic jar. With all the little random goody bag items from kids’ birthday parties, one mom in Los Angeles decided to collect all of them into a big glass jar. If a playdate friend comes over, they get to choose one item from the jar. If your toddler does something great, let him or her pick a toy. Or use the goodies in your child’s birthday piñata.

6. Give yourself a time-out. One mom in Michigan decided to tell her kids, “I am so frustrated. I’d better go to timeout before I get so angry I say something I shouldn’t. I may not talk to anyone until I calm down and I cannot come out until I am ready.” She says her two kiddos were speechless. When she came out 10 minutes later, she felt better and so did her kids.

(Photos via @longestshortesttime and @tarcherperigee, featured photo via Getty)