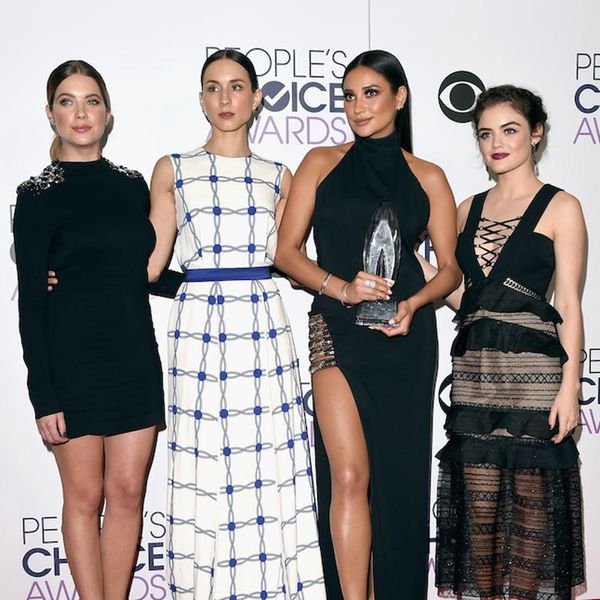 After seven years, everyone’s favorite guilty pleasure, Pretty Little Liars, debuts its final season on April 18. We’ve been through so much with the ladies, from car accidents to creepy dolls to teeth necklaces to a seemingly disproportionate amount of sinister activity for one small town.

But throughout the murderous and unpredictable plot lines of the show, the one thing we could always count on was the flawless fashion. We sat down with the woman behind the wardrobe, Cameron Dale, to get a little insider info on how she kept Lucy Hale, Troian Bellisario, Ashley Benson, and Shay Mitchell fresh to death.

Brit + Co: These were the best dressed high schoolers we’ve ever seen. How has each character’s style evolved throughout the series?

Cameron Dale: Aria (Hale) has left behind her teenage angsty spike, chain, and skull accessories, and replaced them with smaller, finer jewelry. I still love to mix and match prints and unexpected colors for Aria, but in a more adult way. For example, rather than mixing leopard and neon, I’ll mix a purple sequin blouse with mustard trousers.

Emily (Mitchell) has stayed true to her denim and leather roots. I would say her style has evolved the least: She’s still finding her place in the world and trying out different professions. She’ll always be a jeans and T-shirt girl. Shay loves chokers, so we’ve been playing with different types this season.

Since Hanna (Benson) has been in New York working in fashion, we got to play with trendy, designer clothes. I love mixing high and low brands on Ashley, who is always game. While still girly, Hanna’s style has taken a professional, more tailored look.

Spencer’s (Bellisario) style is still classic American prep. Working in politics, Spencer is usually in fancier outfits: or as Troian says, “dry-clean-only pieces.” This season the higher waisted the pant, the better! We love a classic Hepburn style trouser with a fitted blouse. (Photo via Cameron Dale/Disney)

B+C: What would you say is each girl’s signature style?

CD: Aria is trendy with an eye for throwing together unexpected color and pattern. Emily is tomboy and comfortable. Hanna’s feminine and sexy, and Spencer is classic and preppy.

B+C: How do you look for the perfect labels and pieces for each of the ladies?

CD: I usually do big, long fittings at the start of each season, which allows me to go out and shop for all of the girls at once. I’ll hit all of the big stores like Topshop and Bloomingdale’s, my favorite discount stores like Nordstrom Rack and Barney’s Warehouse, then I’ll hit vintage stores and boutiques. I also do a ton of online shopping! I’m obsessed with ASOS and theoutnet. I reach out to our favorite designers for awesome accessories like B-low the Belt, Peggy Li, and Lionette.

I was designing our amazing executive producer Marlene King’s new show Famous in Love (premiering alongside PLL on April 18) at the same time, so I would sometimes be shopping EIGHT female characters at once! Thankfully I have an awesome team. I couldn’t do it without their help. (Photos via Disney/Freeform)

CD: No! I think our girls are so diverse that there is a trend that works for each one of them. While a high-waisted “mom” jean isn’t for everyone, I think there’s a fun way for say, Spencer, to wear them with a loafer and a Rag and Bone blouse and look chic. You’ll see Hanna in an array of bombers, Emily in chokers, and Aria and Spencer in high-waisted jeans: all fun trends that are huge right now. We love the Western jewelry trend so look out for that also! (Photo via Disney/ Freeform)