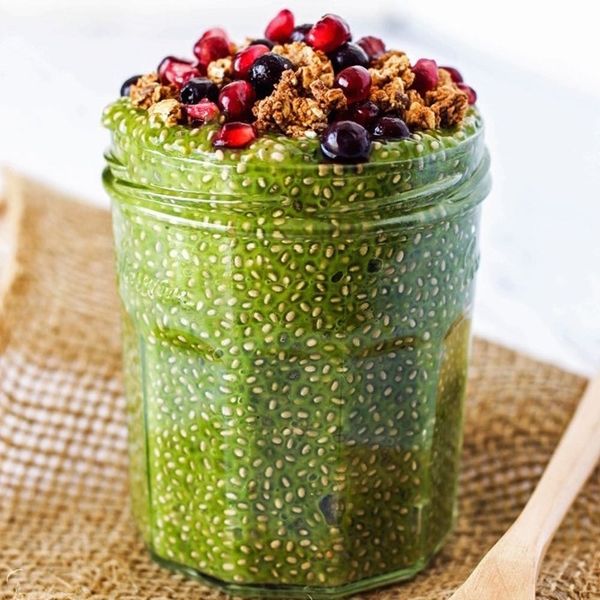 Vegan or not, everyone has their go-to vegan recipes when you’re eating healthy. But when you’re running late and have no time to make pancakes, you need to have plenty of grab-and-go vegan breakfast recipes in your arsenal. Whether you’re a donut fan or you prefer something savory like a breakfast sandwich, there’s something quick and delicious out there waiting for you. Make a pot of coffee and decide which of the following 19 recipes you’ll fix so you can get that extra five minutes of sleep tomorrow, while still enjoying a healthy vegan meal.

1. 10-Minute Cinnamon Raisin Brown Rice Breakfast Porridge: Brown rice isn’t just for savory meals. Use it to replace oats in your usual porridge, then top with pomegranate, almonds and coconut. (via An Edible Mosaic)

2. No-Bake Cookie Dough Energy Bites: Cookie dough for breakfast? Yes, please. Make a big batch of these energy bites over the weekend and have an emergency breakfast stash for the whole week. (via Apple of My Eye)

3. Breakfast Bowl: Just because you’re running late doesn’t mean you don’t have time to nourish your body. Load up a Tupperware container with loads of fruit, oatmeal and nut butter and you’re ready to go. (via Contentedness Cooking)

4. Sun Butter, Banana and Chia Seed Toast: No matter how late you are, you have time to slap some nut butter on a piece of toast. Worst case scenario, you can throw a banana in your purse and top the toast once you get to work. (via The Skinny Fork)

5. Chunky Monkey Quinoa Breakfast Cookies: Thankfully, you don’t need an excuse to eat these cookies for breakfast, because they’re actually good for you. Good luck making the batch last for a whole week. (via Simply Quinoa)

6. Vegan Chocolate Croissants: Obviously, you’re not going to be rolling out croissant dough at the crack of dawn. But with a little bit of prep work, you could be grabbing one of these babies faster than your coffee has time to brew. (via Heart of a Baker)

7. Vegan Pumpkin Oatmeal Streusel Bars: If you want to win the co-worker of the year award, bring a whole dish of these bars with you to work. Everyone else who’s hungry and running late will forever be thankful. (via Pumpkin and Peanut Butter)

8. Matcha Chia Pudding: Chances are, if you’re running late, it’s not your first time. Chia puddings are great for the chronically late because you mix them the night before and they’re ready to go in the morning. Be sure to add matcha powder for an instant energy boost. (via Emilie Eats)

9. Vegan Mexican Burritos: You may not want to spend your Saturday afternoon making breakfast burritos to freeze, but you’ll be very thankful when you have a stockpile for busy mornings. No drive-thru for you! (via The Vegan Eight)

10. Mini Vegan Frittatas: Tofu, almond milk and turmeric create the faux-egg base of these frittatas. Pair them with fruit and a green smoothie and you’re set until lunch. (via Dietitian Debbie Dishes)

12. Quick and Easy Avocado Toast: The only two ingredients you must have for this breakfast are (shockingly) avocado and toast. From there, you can get creative and top it with whatever else you have in the fridge. (via The Glowing Fridge)

13. Spicy Tofu Scramble: Sure, you actually have to do a couple minutes of cooking for this, but it’s so worth it. Leave the dishes for when you get home and you’re looking at a five-minute breakfast. (via Lazy Cat Kitchen)

14. Vegan Banana Bread With Walnuts: Turns out those brown bananas do come in handy. Smear your slice with peanut butter for a hearty breakfast Elvis would approve of. (via Where You Get Your Protein)

15. Vegan Breakfast Sandwich: Avocado, kale and almond butter may sound odd, but if you try it, it won’t disappoint. Think outside the box and you’ll be rewarded handsomely, in the form of your new favorite on-the-go breakfast. (via In It for the Long Run)

16. Vegan Chocolate Hazelnut Donuts: You would never imagine that these indulgent-tasting donuts were made with kidney beans. Grab them on your way out the door and enjoy when you finally get to your desk. (via Vegan Heaven)

18. Vegan Toffee Apple Breakfast Muffins: Having toffee apple muffins around when you’re feeling rushed is better than a good hair day. Maybe throw an extra in your bag for an afternoon snack too. (via My Vibrant Kitchen)

19. Vegan Wild Blueberry Scones: Starbucks has nothing on your homemade scones. Make your latte at home too and you’ve cut 30 minutes from your morning routine. (via Go Dairy Free)

Paige Johnson
Paige is a blogger, food writer and culinary master from Louisville, Ky. She's a newlywed who's obsessed with dogs and renovating her 117 year old home. When she's not working on her blog — My Modern Cookery — you can find her binge watching F.R.I.E.N.D.S with a triple shot latte in-hand.
Breakfast Recipes
Healthy Eating
Breakfast Recipes Healthy Recipes Recipe Roundup Vegan Recipes
The Conversation
More From Healthy Eating