11 Things We Hope to See at the Royal Wedding 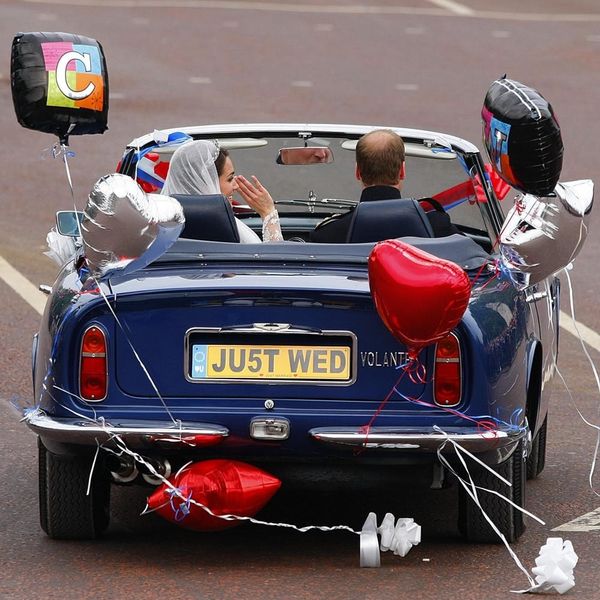 Prince Harry and Meghan Markle's wedding is shaping up to be one of the biggest pop-culture events of the year — if not the biggest. There are certain things we know we can expect on the big day, but there are bound to be a few surprises, too. Here are 11 things we hope to see at Prince Harry and Meghan Markle's royal wedding. (Photos via Justin Tallis/WPA Pool/Getty Images + Chris Jackson/Getty Images + Samir Hussein/WireImage + Chris Ison/PA Images via Getty Images)
When Harry Meets Meghan: The groom's reaction to first seeing the bride is an emotional moment in any wedding, and there's no doubt that Prince Harry will welcome Meghan Markle to the altar in St. George's Chapel with excitement and a few sweet words — not unlike when Prince William told Kate Middleton she looked beautiful during their 2011 ceremony. (Photo via Dan Kitwood/Getty Images)
Brotherly Love: Prince Harry served as Prince William's best man, and now William will return the favor. Our fingers are crossed for a sweet moment like the one that happened at William's wedding in 2011: When Duchess Kate Middleton entered Westminster Abbey, Harry looked back at his soon-to-be sister-in-law and told his brother, smiling, "Wait till you see her." It still makes us tear up! (Photo via Andrew Milligan/WPA Pool/Getty Images)
Meghan Markle With Her Family: While Markle's family has been in their fair share of headlines since the royal couple went public, we've yet to officially see the bride-to-be's parents with their daughter. Her mom and dad, Thomas Markle and Doria Ragland, will arrive in the UK in the week before the wedding to spend time with Harry's family, and they'll both have important roles on the big day too. (Photo via Charles McQuillan/Getty Images)
Celebrity Guests: While we know that many members of the family and even the public will attend, the celebrity portion of the royal couple's guest list has been tightly guarded. Markle's good friend Priyanka Chopra let it slip that she'll be attending, and Spice Girl Mel B. has hinted that she'll be there as well, but we don't know who else from the couple's circle of famous friends scored an invite. (Photo via Clive Rose/GP/Getty Images)
Ridiculous Hats: We mean ridiculous in the best way possible, of course. What would a royal wedding be without a sea of ornamental hats and fascinators? Some might say they're the most important part of a guest's outfit. (Photo via Chris Jackson/Getty Images)
Prince George and Princess Charlotte in the Bridal Party: First of all, Prince George and Princess Charlotte are irresistibly adorable on camera, full-stop, and second, do you remember how cute they were in Pippa Middleton's wedding party in 2017? We might even get a rogue Charlotte wave if we're lucky. (Photo via Samir Hussein/Samir Hussein/WireImage)
Duchess Kate, Super Mom: Duchess Kate was in charge of corralling the children at her sister Pippa Middleton's wedding in May 2017, and as anyone who has ever been around this age group can attest, that isn't always the easiest job. Hilarious photos of the mom-of-three shushing the kids went viral, and with any luck, we'll get to see her do her organizational best with the young bridal party brood once again. (Photo via Justin Tallis/WPA Pool/Getty Images)
Another "Balcony Girl" Moment: When Prince William and Duchess Kate appeared on the balcony at Buckingham Palace after their ceremony, they were nearly upstaged by their bored bridesmaid Grace Van Cutsem. William's three-year-old goddaughter appeared overwhelmed by the cheering and applause from onlookers, and quickly covered her ears as William and Middleton shared a sweet kiss for the crowds below. Middleton redirected her to wave to the people, but an iconic moment was already born — here's hoping for another like it. (Princess Charlotte, we're looking at you.) (Photo via Peter Macdiarmid/Getty Images)
Personal, Informal Touches: Royal weddings aren't exactly casual affairs, but that doesn't mean there isn't room for some informal touches. Following Prince William and Duchess Kate's 2011 nuptials, the couple drove off in a vintage Aston Martin convertible, which was adorned with balloons and streamers. Prince Harry and Meghan Markle's down-to-earth demeanors leave room for something a little less formal to pop up at their wedding too. (Photo via Chris Ison/PA Images via Getty Images)
Candid Moments: Perfection is overrated — sometimes it's fun when things don't go as planned. Case in point: After Prince William and Kate Middleton exchanged vows at their wedding, the prince struggled to place his wife's ring on her finger, eventually twisting and pushing it into place. It was a sweet reminder that the royals, who often seem larger than life, are just human. We don't want anything to go seriously wrong for Prince Harry and Meghan Markle, of course, but a humorous little hiccup or two wouldn't be the worst thing. (Photo via Andrew Milligan/AFP/Getty Images)
Modern Flair: Prince Harry and Meghan Markle have already bucked a few royal traditions, and it sounds like they plan to put their own spin on the wedding, too. From an artisanal cake to seasonal, sustainable flowers, every detail mirrors the couple's modern style — and we can't wait to take it all in. (Photo via Victoria Jones/WPA Pool/Getty Images)

What do you hope to see at Prince Harry and Meghan Markle’s wedding? Let us know @BritandCo!