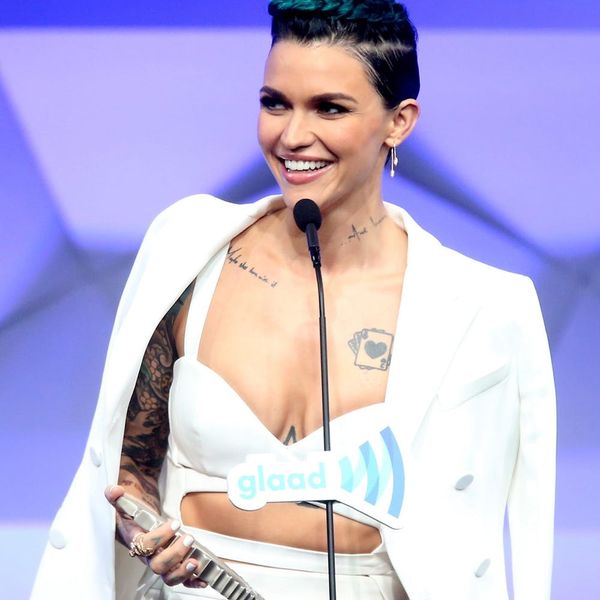 On Saturday night, some of the most influential members of the LGBT community got together to celebrate the GLAAD Awards, a special night which honors members of the media and entertainment industry for their outstanding representations of the LGBT community. Orange Is the New Black actress Ruby Rose was in attendance and the recipient of the esteemed Stephen F. Kolzak Award. It was such a big deal that her bud Taylor Swift showed up as a surprise to present it to her.

During Ruby’s acceptance speech she spoke about growing up as a young, queer girl in Australia who came out at age 12 but struggled to find a relatable role model. She tells the audience, “I felt there was so much wrong with me and there was so much weird about me… I practiced looking like a boy. Still do. I got appalled when I got breasts. Sometimes, still do. I spent a lot of time in a very vulnerable place with little to no support.”

When Ruby reached her lowest point, it was her aspirations that kept her going. She says, “I dreamt of being a famous singer or an actor who, through my work, could inspire others to be themselves or hang in there. I had no idea how I dreamt so big when I felt so small, but I know it got me through each day. I wanted to be the person I couldn’t find in my life.”

From where we’re sitting it looks as though Ruby’s wish has finally been granted. When asked to share her advice to young members of the LGBT community on the red carpet, Ruby is quick to respond, “Hang in there, believe in yourself and love yourself. Know that you are on this earth for a reason.”

To catch all of the Glaad Awards set aside your Netflix queue and turn to Logo TV tonight at 10ET/9C.

Cortney Clift
Cortney is the senior writer and special projects editor at Brit + Co. She typically covers topics related to women's issues, politics, and lifestyle. When she's not buried behind her computer you'll find her exploring New York City or planning her next big adventure.
Work