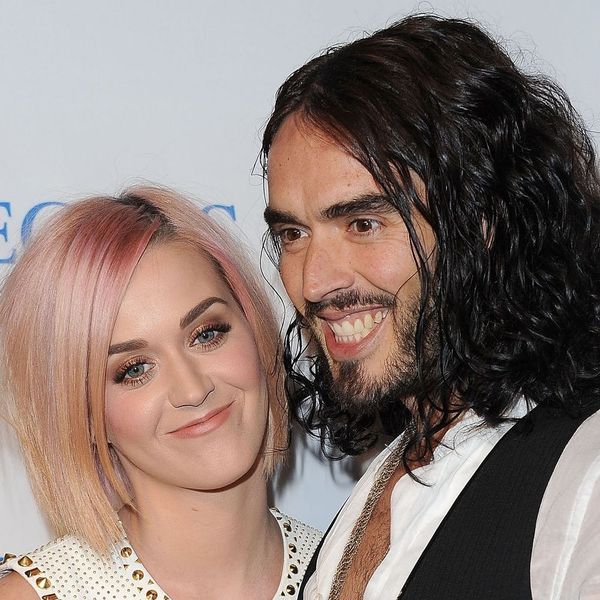 It’s been seven years since Katy Perry and Russell Brand wed in India, and five years since their subsequent split. In the time since their uncoupling, the exes have avoided contact — though both have been very vocal about their split, with Brand blaming fame for his breakup-by-text made infamous in Perry’s 2014 concert documentary Piece of Me. Now, the comedian admits he would like to make amends with his famous ex.

Speaking to Grazia, the 42-year-old had nothing but nice things to say about the “Swish, Swish” singer, gushing, “It was a very important and lovely time in my life. I don’t regret being married to Katy at all. I have very positive feelings about that whole experience and Katy is an extraordinary woman.”

He also said he would never remove or cover up his matching tattoo with his ex, despite being remarried to Laura Gallacher, adding, “I’m willing and open for reconciliation, any kind. Because if we can’t overcome our relatively trivial personal disputes in this world, what hope is there for us?”

From the shoot with @bigissueuk

It certainly wouldn’t seem out of the questIon on Perry’s end: Despite the new dad’s deplorable breakup methods, she too remains amicable on the public front, calling him “a very smart man,” in Vogue.

Guess we’ll have to wait and see if these two can make any friendlier amends than the pop songstress and her frenemy Taylor Swift!

Have you ever reconciled with a former flame? Tell us @BritandCo!

Kat Armstrong
Kat has been a writer, social media maven and mom for longer than she's willing to admit. She's also spent time in front of and behind the camera, interviewing celebs, politicians and acting as a producer for fashion and artistic photography shoots. When she isn't writing for various orgs and publications, she's hanging with her kids, husband and French Bulldog, Peter, in Toronto, Canada.
Celebrities
Celebrity News
Celebrities Celebrity Breakups Katy Perry
More From Celebrity News