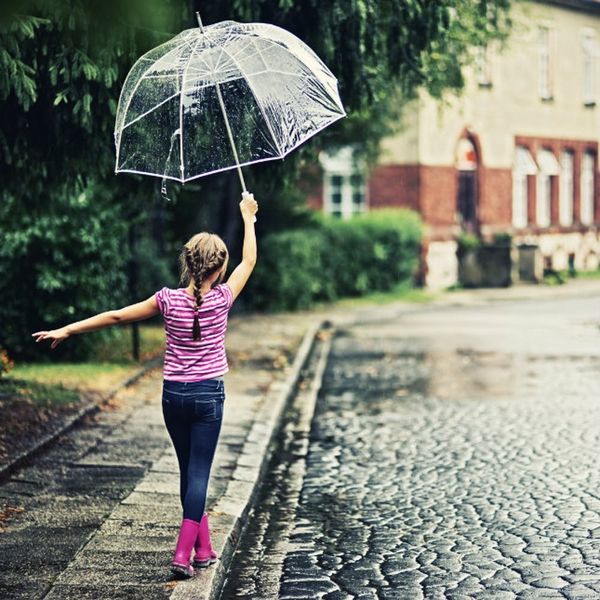 These days, if we see a child unattended — whether they’re walking their dog, frolicking in a park or playing Pokemon GO — we, as a culture, freak out. Back in the day, this def wasn’t the case. Up until about 10 years ago, seeing kids running around a la Stranger Things was totally normal. Now, it’s a big cause for alarm. Do-gooders routinely intervene or judge other parents when they see kids relishing alone time. And the reaction to free-range kids, which is often just responsible adults parenting less or encouraging play the Danish way, is heading to an ugly extreme that is absolutely *not* based in fact, at least according to a new study.

A major reason parents these days are afraid to let kids out of their sight is a worry about predators. But researchers at the University of California at Irvine found that our society of nervous Nellies and do-gooders is doing more harm than good. The odds that something bad will happen to your child — a worst case scenario that drives our anxiety and, some may say, over-protection — is really, really slim. According to the study, it’s about 0.00007 percent or one in 1.4 million chance.

With this cultural shift toward a “leave no child alone” norm, there have been several high-profile cases of parents being publicly persecuted and even investigated for child abuse when they’ve left their kids unattended for a spell. Ashley Thomas and her team of researchers suspected that some people’s exaggerated perceived risk of leaving a child alone wasn’t so much about whether the kid was actually in danger or not, but was based on their moral convictions around good parenting.

To find out if their hunch was accurate, researchers asked about 1,500 participants to rate the level of danger children were in when left alone during different scenarios —like a two-year-old left home alone for 20 minutes watching Frozen and a six-year-old at a park a mile from her house. These scenarios were paired randomly with the reasons for the parent’s absence, like unintentional, because of work, or to meet a romantic interest.

They found that people’s judgement of the situation’s danger was based on, well, their judginess of the parent’s morals. Participants rated the danger level of all situations much lower if it was unintentional, a bit higher if it was because of work and highest if left alone so that the parent could have an affair.

There have been a few situations (for mom and kids) recently that have resulted from this judgement of exaggerated danger. Last year, a Maryland couple famously faced a neglect investigation because they let their 10-year-old son and six-year-old daughter walk home alone from a local playground. There were also other high profile cases involving a mom who let her nine-year-old play in a park while she went to work, and a mom who let her seven-year-old walk to a park alone (both of those mothers were arrested).

It’s not just detrimental when officers of the law get involved when there isn’t a real threat (causing emotional distress to both mother and child), but it’s also harmful when other adults needlessly judge another parent’s choices. If a child is physically and psychologically fine to be alone (whether in a car or at a playground) and there’s no immediate danger, it may be worth leaving that family alone. When we do, we can (officially, according to science) cause more harm than good.

At what age do you think it’s okay to let a child walk outside alone? Tweet us @BritandCo and let us know!

Sunny Chanel
Sunny Chanel is a freelance writer as well as the founder of the whimsical site Wonder and Company. When this proud San Franciscan isn't writing, working on her fixer-upper or doing crafts, she is playing dress up with daughter and planning her next trip to Disneyland.
Parenting
Parenting
Parenting science study