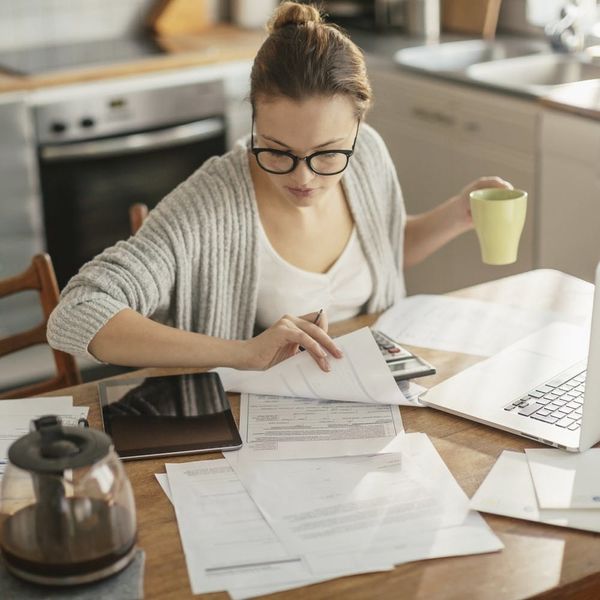 When Stacy Francis was a sophomore in college, she finally asked her grandmother why she’d stayed in an abusive relationship with her grandfather. The answer was both simple and heartbreaking: financial security. Though Francis had never had any intentions of having a career in finance before then, the exchange ultimately changed the trajectory of her life.

Francis wanted to be empowered by her finances rather than controlled by them, so she began taking certified financial planning classes. Even though she’s never considered herself a “numbers person,” she realized that her willingness to learn was more important. In 2002, she combined her certification with her passion for volunteering and created Savvy Ladies, a nonprofit organization that provides women with financial education and resources.

“94 to 99 percent of domestic violence cases also include financial abuse,” says Francis, meaning that abusers seize control of their victim’s access to monetary resources. “It’s their way of controlling the victim, because without financial independence the victim finds it very difficult to walk away.”

While not every woman that turns to Savvy Ladies has to be in a grave situation like Francis’ grandmother, the organization’s goal to empower women through financial education is still very much rooted in that story.

Savvy Ladies hosts several programs a year in the form of live and webinar events. They also maintain a video library with 20 to 30-minute tutorials on a vast range of topics, from divorce to retirement. But it’s their helpline that Francis describes as “unbelievably powerful.” It allows women to work one-on-one with a certified financial planner for free. Francis compares it to match.com because it matches women with an appropriate planner according to their financial needs.

“A lot of the women are doing research and are trying to find answers to their questions because something has happened in their life. It’s very rare that someone comes to us without a specific cause. There’s usually a wakeup call or some type of trigger event,” says Francis.

For Laura Lifshitz, that trigger event was a divorce followed shortly by a 70-day deadline to move out of her house. Through the Savvy Ladies helpline, she was told what to expect and given advice on how to form a realistic budget, something necessary as a newly single mother. In 2015, Lifshitz was named Savvy Lady of the Year based on the progress she made in the year and a half since her divorce. She moved into her own home, doubled her income, and maintained financial responsibility. Not only has she made changes in her personal life, but she’s committed to continuing her financial education and encourages other women to do the same — all three which are characteristics of the Savvy Ladies’ mission.

“It’s overwhelming when you have to learn to take over the gears fast and I was not prepared,” Lifshitz says. “But it made me stronger. It’s empowering to be in control of your finances, even when you’re working with a budget like mine.”

She’s currently working as a freelance writer and is open about her finances with her daughter in hopes that she’ll be better prepared for the future.

“If you take the time to educate women and give them support, there’s no stopping someone,” Francis says of women like Lifshitz.

Both Francis and Lifshitz agree that more women need to start the dialogue on personal finance. Whether it’s with your partner, your close friends or your children, they both support weakening the money taboo.

“One of the most powerful things you can do is start the conversation about money,” says Francis.

Lifshitz adds, “It’s good to have friends to hold you accountable for your finances. It’s not in our culture. Our parents didn’t do that with us, so it’s up to this generation.”

What do you think of Savvy Ladies’ mission? Tell us @BritandCo!

Natalie Zisa
Natalie Zisa is a freelance writer based in New York City. When she's not writing about inspiring women, she's pursuing dance professionally. Otherwise, you can find her searching for free fitness classes, lip syncing to her favorite Italian music, and enjoying her mom's homemade pizza. If she could interview one person, it would be Chelsea Handler.
Ladies First
Empowerment
Ladies First Money
More From Empowerment