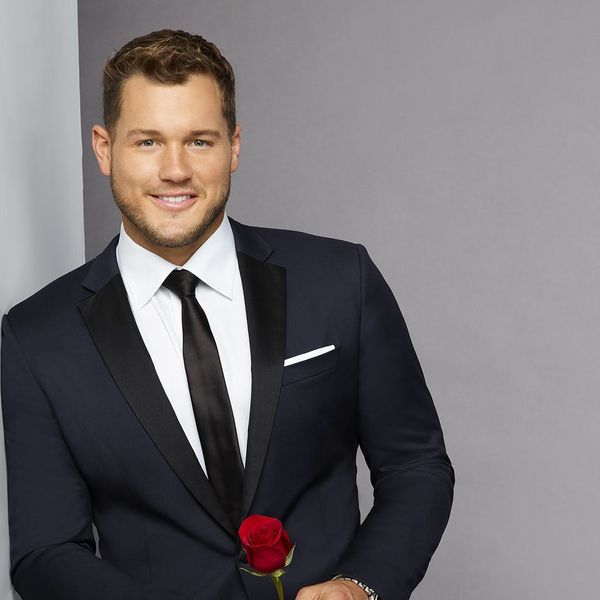 Season 23 of ABC's The Bachelor begins Monday, January 7, 2019, with Bachelorette and Bachelor in Paradise alum Colton Underwood at the center of the action. Before he starts handing out roses, click through to learn more about the former football player. (Photo via ABC/Rick Rowell)

He's had a connection to football since birth. Underwood was born on January 26, 1992, which just happened to be Super Bowl Sunday. That year's big game (pictured above) was between the Buffalo Bills and the Washington Redskins, who defeated the Bills, 37-24. (Photo via Rick Stewart/Getty Images Sport)

He was even named for a football team. According to his Bachelorette bio, Underwood was named for the Indianapolis Colts, the NFL team in the city where he was born. (Photo via Elsa/Getty Images)

He spent some time in the NFL. After playing football for Illinois State University, Underwood was signed as an undrafted free agent by the San Diego Chargers in 2014. He played in a few preseason games — that's him, number 49, in the photo above — but was released before the season started, signed to the Philadelphia Eagles' practice squad, released again, and then signed to the Chargers' practice squad. In 2015, he joined the Raiders' practice squad, but they released him in 2016 and he retired from football not long after. (Photo via Stephen Dunn/Getty Images)

He dated Olympian Aly Raisman. Underwood's stint as a member of Bachelor Nation isn't his first brush with fame. Back in 2016, he made headlines for using social media to ask out gymnast Aly Raisman following her gold-medal performance at the Rio Olympics. The two dated for several months, during which time they hit several red carpets, but they split due to distance. "We're taking a break right now," Underwood told the Journal Star in June 2017. "We're still good friends and talk, but all that travel had been a nightmare. It ended fine. We're in a good place." (Photo via Frazer Harrison/Getty Images)

He used to own a bar. According to the Journal Star in Peoria, Underwood opened 4th & Goal Grill in Washington, Illinois, in August 2016, while he was still signed with the Oakland Raiders. At the time, the Journal Star reports, he described it as an "industrial, modern, rustic sports bar." However, due to other commitments — including his appearance on The Bachelorette — he sold the business in 2018 to his aunt and uncle, Sherrie and Geoff Lucas, who turned it into a barbecue restaurant called Brickhouse BBQ. (Photo via ABC/Craig Sjodin)

He loves dogs. If you follow Underwood on Instagram, you've probably seen photos of his dogs, Sniper and Thor, the latter of whom he adopted just last August. You've also probably seen him post about going to events with dogs, or filming adorable Bachelor promos with a bunch of puppies. (Photo via John Medina/Getty Images)

This will be his third Bachelor Nation show. Bachelor Nation fans first met Underwood on Becca Kufrin's season of The Bachelorette last year. He made it to the final four but was sent home after the hometown dates in week eight. A few months later, though, he resumed his search for love on season 5 of Bachelor in Paradise, where he attempted to rekindle his spark with Kufrin's Bachelor costar and friend Tia Booth. (More on that in a minute.) (Photo via ABC/Paul Hebert)

He dated fellow Bachelor Nation star Tia Booth, both on and off screen. Prior to his stint on The Bachelorette, Underwood went on a few dates with season 22 Bachelor contestant Tia Booth. Their past came to light in an early episode of Becca Kufrin's Bachelorette season, and although he swore it was in the past, it came up repeatedly throughout their time together. In fact, shortly before Kufrin sent him home, Booth revealed to her friend that she still had feelings for Underwood.

He and Booth tried to start things up again on season 5 of Bachelor in Paradise, but they ultimately decided they were better off as friends and left the beach separately. Soon after, ABC announced the former athlete as the next Bachelor. (Photo via ABC/Paul Hebert)

He's ready for marriage. Although he's one of the youngest Bachelors in the history of the franchise, Underwood has said that he's ready to spend the rest of his life with someone. "[A proposal is] what I'm looking for. Being engaged and then getting married shortly after that," he told Michael Strahan in an interview for Good Morning America last September. "Third time's the charm, that's what they say, right? That's what I'm hoping for!" (Photo via ABC/Craig Sjodin)

Desiree O
Desirée O is a ‘Professional Bohemian’ who loves anything and everything related to the arts, entertainment, and pop culture. She ADORES being a ‘Newsy’ for Brit + Co, covering all of the latest tidbits of awesomeness that you want to read about. When she’s not writing, she’s either making messy art, going on long adventurous walks with her camera, or poking around over at bohemianizm (http://www.bohemianizm.com/). You can find out about Desirée O and her work at http://DesireeO.com/ or follow her on Twitter @DesireeO.
TV
TV
TV The Bachelor
More From TV