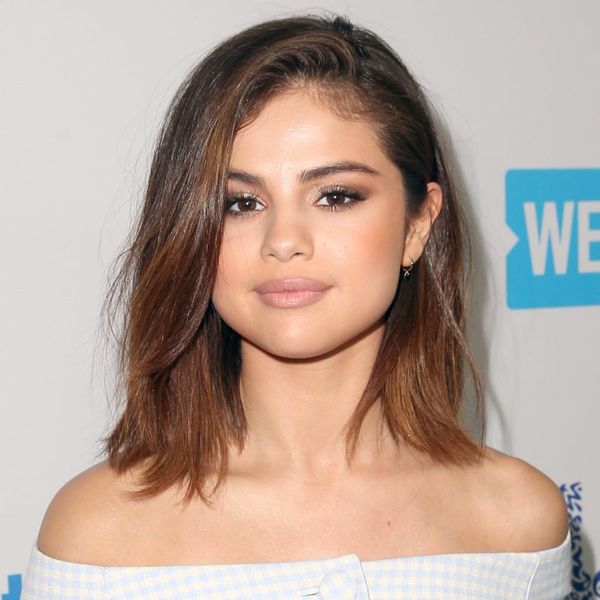 Selena Gomez debuted the music video for her new single “Fetish” this week, and the internet had a few… questions. Like why, exactly, the 25-year-old was chowing down on everything from glass to lipstick and using an eyelash curler on her tongue rather than her lashes in the 3:47 minute-long clip.

Luckily, the pop star sat down with the vid’s director (and one of Gomez’s BFFs), Petra Collins, and Dazed to clear up any confusion surrounding the vid (among other things!), so we need wonder no more.

According to Collins, the video actually came out of their shared love of horror films. “It’s still so crazy to me how, when I first heard “Fetish,” I pictured to the backdrop of horror,” she muses.

After sending Gomez some of her own ideas, The Weeknd’s lady apparently jumped on board, making a moodboard of ideas based around horror films. “I made it very clear to you that I didn’t see “Fetish” how most people know the word at face value,” Gomez recalls of her chats with Collins. “When most people hear the word fetish, they think of S&M and all that sexual sh*t, but you didn’t. You knew why I loved it. You told me, ‘I think this song is about love, something crazy and complicated.’”

As the two go back and forth about everything from the energy they passed between them to get the shots down pat to their choice to film in the suburbs, the short film’s underlying message becomes crystal clear: “I love the video because it shows the very dirty, gross, and weird love you can have toward someone. This is how obsessive some people get and how they release,” Collins says.

Hmmm. While we’re not sure how many people “release” by chewing up broken dishes, Gomez included (“I’m not saying I’ve ever done something similar to the kitchen scene,” she clarifies), we suppose it IS possible… in a Fatal Attraction sort of way.

Collins, however, doesn’t see Gomez’s stranger actions in the clip as dark. “You can see this angry, sad, whatever person, but also be in control of it,” she explains. For her, that was part of the point: giving Gomez permission, as a woman, to let go of her feelings, then reign them back in. “Women are always told, ‘Oh, be in control of your feelings,’ and a woman is never allowed to express her anger without being demonized as PMS-y,” she quipped. “It’s not going crazy, it’s going with it; it’s getting final!”

What did you think of Selena’s latest vid? Sound off over @BritandCo.

Nicole Briese
Nicole is the weekend editor for Brit + Co who loves bringing you all the latest buzz. When she's not busy typing away into the wee hours, you can usually find her canoodling with her fur babies, rooting around in a bookstore, or rocking out at a concert of some sort (Guns N' Roses forever!). Check out all her latest musings and past work at nicolebjean.com.
Music
Music
Music Selena Gomez
More From Music