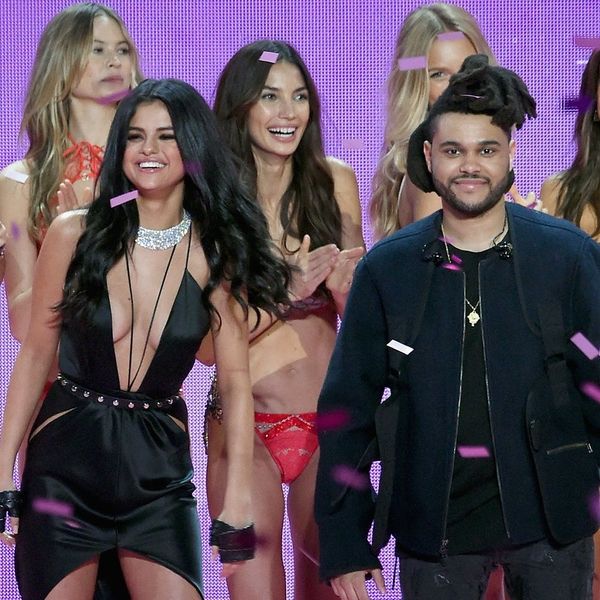 Selena Gomez and The Weeknd have made no secret of their budding relationship: The two have been dating for months now, following one another on Instagram, taking PDA-filled vacays, and giving us sneaky glimpses of their love for one another with cute (if short-lived!) social media videos via Instagram Stories and Snapchat.

Yet neither Abel (The Weeknd’s real moniker) nor Gomez, who largely keep their Insta page business-focused, have added a more permanent photo memento of their union for fans to fawn over. All that changed last night, however, when the “Star Boy” singer uploaded a shot of himself and Gomez snuggled up next to one another while bathed in a dark red glow as she pulled him close and kissed his cheek.

While the snap is super cute and all, we can’t help but marvel at the timing, considering it was just yesterday that news broke that The Weeknd’s ex-girlfriend, Bella Hadid, had just unfollowed him. Perhaps it was the push the musician needed to finally share his love with the rest of the world?

Whatever his motivation, fans were clearly pleased, with comments flooding in of “FINALLY” and “Selena is perfect for you and you make a very good couple.”

The shot was reportedly taken at a birthday party for rapper Belly, where the lovebirds stayed close to one another. “Selena and The Weeknd were very sweet together,” a source told E!. “They were sitting together by a fire pit and never left each other’s side. He was kissing her forehead and holding her hand.”

Fans who had been concerned about Gomez’s drinking habits with The Weeknd also needn’t have worried — the source says the couple wasn’t drinking, but rather noshing on pizza and chatting while others around them were “partying hard,” taking off shortly after a birthday cake was brought out.

Sounds like these two are in it for the long haul!

Are you happy to see The Weeknd and Selena showcasing their love on social media? Tell us over @BritandCo.

Nicole Briese
Nicole is the weekend editor for Brit + Co who loves bringing you all the latest buzz. When she's not busy typing away into the wee hours, you can usually find her canoodling with her fur babies, rooting around in a bookstore, or rocking out at a concert of some sort (Guns N' Roses forever!). Check out all her latest musings and past work at nicolebjean.com.
Celebrity Couples
Celebrity News
Celebrity Couples love Selena Gomez
More From Celebrity News