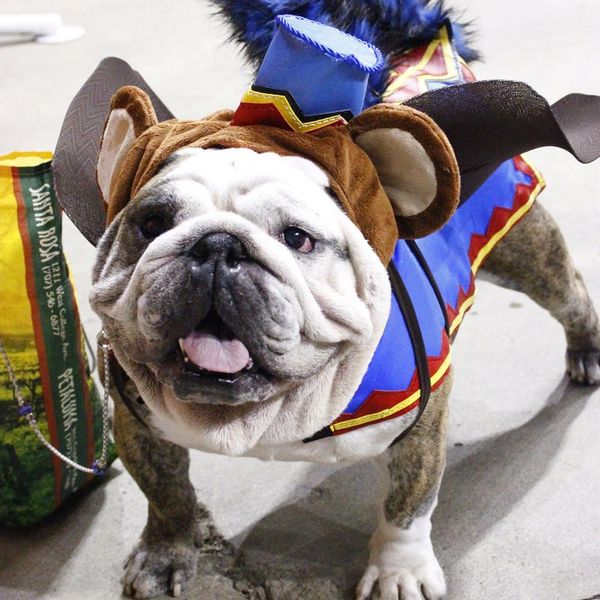 Over the weekend, thousands of San Francisco’s cutest dogs gathered for the Golden Gate Kennel Club’s Dog Show. Sure, there were a lot of focused judges, some very serious dog owners (those guys don’t mess around) and pups getting glamourous blowouts left and right – basically that mockumentary Best In Show is super on point about this subculture. But we were there for one thing and one thing only: the dog fashion show. Because really, is there anything better to do on a Satuday afternoon than check out a bunch of creative dog costumes? Scroll on down to check some of the best looks we spotted.

1. Baba Louie: Is Baba Louie an English bulldog or a flying monkey straight out of the Wizard of Oz? Your guess is as good as ours.

2. Finley: We’re not exactly sure if this hairless mini standard’s bridal inspired outfit is the stuff of costume dreams or nightmares. Either way, we wish the newlyweds all the best.

3 + 4. Melody and Vixen: Giving you some group costume inspo, Australian cattle dogs Melody and Vixen teamed up to create a ranch inspired look that’s just as cute as it is true to their name.

5. Emma: This Gone With the Wind inspired look was definitely more glamourous for this labrador’s owner and we’re pretty sure she’s feeling a little bummed about being staged up.

7. Maxie: Was this English bull-mastiff is dressed up as we’re not entirely sure. What we do know is that she looks fabulous.

8. Twinkie: This adorable border collie’s outfit wasn’t super surprising considering her name is Twinkie. But hey, any costume that comes complete with portable treats is cool with us.

9. Nico: Clearly, Nico the Anatolian shepherd knows it’s important to rest up before you spend the afternoon fooling people into thinking you’re a lion.

Have you DIYed a hilarious dog costume for your pup? Share a photo with us Twitter @britandco.