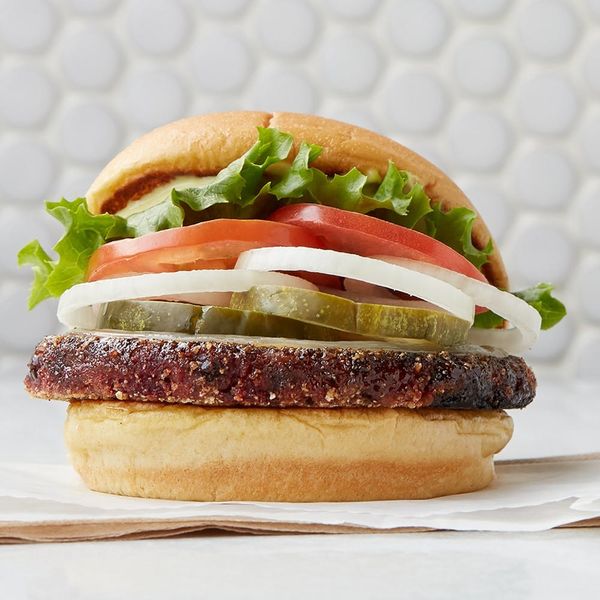 Shake Shack, already among the favorite spots for fast food around the world, is testing a new burger that will have vegetarians very happy. Starting April 19, select Shake Shacks will have a new Veggie Shack, a house-made veggie burger that blends black beans, brown rice, and roasted beets and is topped with provolone cheese, lettuce, onions, pickles, and vegan mustard and mayo. You can feast on this test burger in NYC (Midtown East, Astor Place, and Upper East Side), LA (West Hollywood and Glendale), and in Austin (The Domain).

While this new veggie option will be available as an app exclusive from April 19 to 23, meaning you can only order on the Shack App, the Veggie Shack will fully roll out on April 24 (to those test locations only, of course). There’s no word yet on how long the test will last or when we may see the veggie burger nationally, so if you are near one of these locations, you shouldn’t sleep on the opportunity to give it a try. This burger is vegetarian, but Shake Shack tells us you can turn it vegan by removing the cheese and subbing the bun for a gluten-free bun or lettuce wrap (the regular bun contains trace dairy).

Interestingly, Shack Shack already has a vegetarian option on their menu, the ‘Shroom burger. A representative for the brand promises Brit + Co that the new menu addition will supplement the veggie offering and not replace it. Phew!