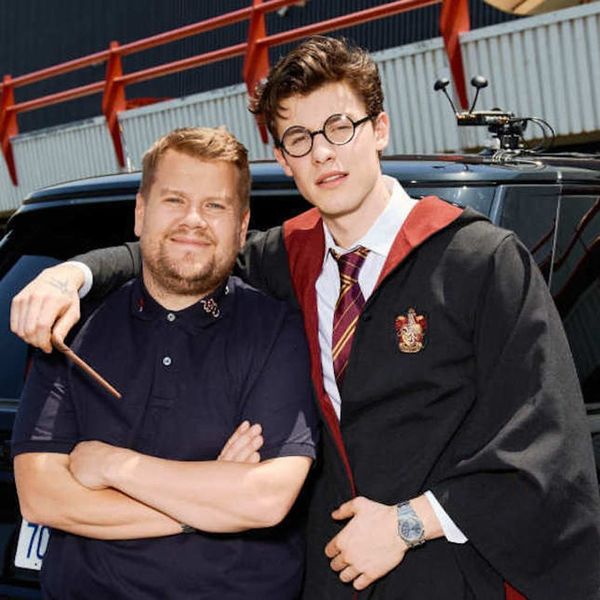 You never know what might happen on Carpool Karaoke. While it’s usually host James Corden pulling off surprises for his guests, the most recent episode featured an unexpected Harry Potter fanboy moment from none other than Shawn Mendes.

“On a scale of 10 being crazed superfan and zero is, ‘I hate it, never seen it,’ where are you?” Corden asked the 19-year-old pop phenom about his Harry Potter fandom.

Mendes thought about it for a split-second before saying that he ranks at about 9.5 on the obsessive fan scale and even has “a whole book at home that I wrote all the spells in and stuff.”

As Corden continued to question the singer on his love of J.K. Rowling’s wizarding world, the camera revealed a series of escalating costume changes. While Mendes spoke about the magical wands and candies, a lightning-bolt scar appeared his forehead. Then, as he discussed how Harry Potter keeps him young — poof! — those trademark round glasses popped up.

Mendes eventually ended up in full Hogwarts attire, sitting calmly in his robe and holding a wand as he admitted that meeting Emma Watson — AKA Hermione Granger — was one of the first times he was every really starstruck.

Mendes was adamant that he’s simply a fan and not “crazy obsessed,” but his lewk tells a different story: The last camera cut revealed a full Dumbledore getup, complete with long white hair and a beard.

If you didn’t already love Mendes, you will after this. Check out the full hilarious segment below.

Where does your Harry Potter fandom rank on a scale of 0 to 10? Let us know @BritandCo!