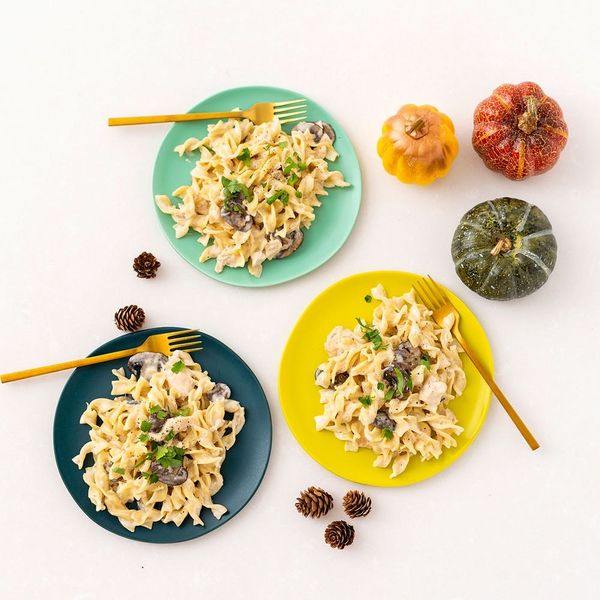 Have you ever wondered how those insanely popular pinned recipes on Pinterest actually taste? Us too, which is why we've started a new series, Pin to Plate. We're interviewing the blogger, testing out those recipes in-house, photographing our results, and sharing our experience. #PinFails, you've become a thing of the past.

Stroganoff, the Russian pasta dish coated in a creamy mushroom sauce, has been a dinner staple among American homes for decades. It's flavorful and relies on a handful of shortcut ingredients like cream of mushroom soup, instant French onion soup (or dip), and cream cheese. Though you may think it's grown out of fashion, Pinterest has proven that comfort food still maintains viral status! We present to you the most pinned slow-cooker recipe: this chicken stroganoff, pictured left.

Nearly 300K pinners have saved this recipe from Alyssa Rivers of The Recipe Critic, which has amassed her a following of over 280K fans on the social network."I love cooking for my family and enjoy simple and flavorful meals," she shares in an email to Brit + Co. That passion is surely what inspired such a winner of a chicken dinner. “It is a classic meal that is made easy," she elaborates. And that's certainly the case. We only slightly adapted her recipe (our version is pictured right), and our tasters swore it reminded them exactly of the version their moms and grandmas would cook them.

Because a lot of her commenters requested an Instant Pot version, we made ours in our beloved Pioneer Woman IP (using the slow-cooker setting). To our surprise, the stroganoff ended up cooking much faster in the IP than in our standard Crock-Pot, which is awesome when you're at home on a Sunday but you should be aware of if you're making it on a weekday. We also stirred in the cream cheese at the very end of the cooking to prevent the sauce from separating and curdling (dairy should always be a last-minute add).

Cook Time: 2 1/2-6 hours, depending on how fast your slow cooker cooks

1. Lightly grease the inside of a slow-cooker bowl, then top it with chicken, cream of chicken soup, and dry onion soup (or dip) mix.

2. Cook on low for 4-6 hours or until chicken is completely cooked through. FYI, in an Instant Pot, using the slow-cook function on low, this only took about 2 1/2 hours.

3. About 20 minutes before you are ready to serve, boil a large pot of water, and cook noodles according to package directions until tender.

4. Drain and rinse noodles under cold water to halt cooking if your stroganoff is not quite done.

5. When chicken is completely cooked through, turn heat to the warm setting on the slow cooker. Stir in cream cheese until completely dissolved in the sauce.

7. Stir in noodles until completely coated in the sauce.

8. Divide onto plates, and garnish with parsley.

when are you supposed to add the mushrooms? From the picture it looks like the beginning, but the instructions do not mention the mushrooms. I just realized after 4 hours that I should have put the mushrooms in.