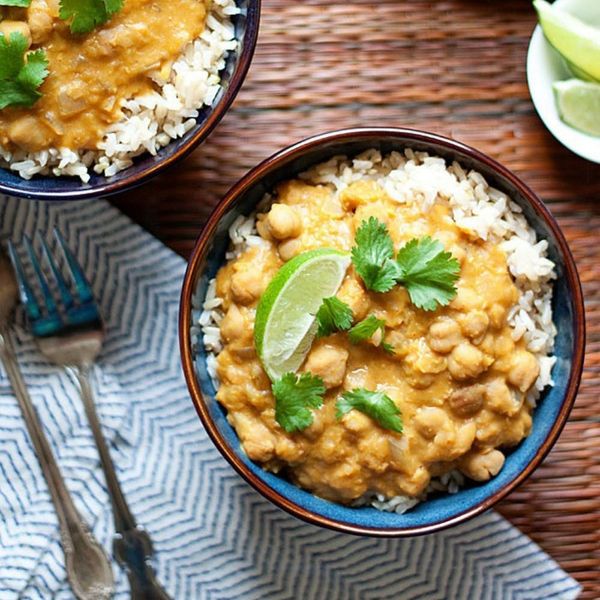 Crock-Pot recipes are the most awesome life hack: Food simmers away all day while we're at work and is ready to ladle out the minute we walk through the door. But for vegans combing the internet for inspo, it can be a challenge to find slow-cooker recipes that really are meat- and dairy-free. But, hey, no biggie; we've done the work for you. Here are some scrumptious vegan recipes for your slow cooker.

1. Vegan Cinnamon Roll Casserole: Most of us haven't had cinnamon rolls outside of the oven, but the pastry can be slow-cooked too. as proof with this recipe. (via Brit + Co)

2. Easy Vegan Hot Cocoa: Rich coconut milk and soy milk are the keys to making vegan hot chocolate just as creamy — and maybe even silkier — than the dairy version. (via Brit + Co)

3. Slow-Cooker Baked Beans: Thanks to a blend of molasses and spices, these beans have the richness of those made with pork but are meat-free. (via Brit + Co)

4. Slow Cooker Caramelized Onions: Make a big batch of these caramelized onions in your slow cooker, then turn it into French onion soup by stirring in warm vegetable stock when you get home. Top it with a Daiya “cheesy" piece of toast if you know what's good for you. (via Brit + Co)

5. Slow-Cooker Vegan Lemon Lentil Soup: A spritz of lemon juice can change an entire dish. The citrus brightens up every element of this simple soup, so each spoonful is fresh and inviting. (via Gimme Some Oven)

6. Pumpkin, Chickpea, and Red Lentil Curry: This Indian curry is creamy thanks to coconut milk and pumpkin purée. (via Kitchen Treaty)

7. Slow-Cooker Thai Spiced Snack Mix: Coated with anti-inflammatory spices, this mix of nuts, seeds, and goji berries packs a powerful dose of nutritious fats, proteins, and vitamins. A handful will keep you going when your energy starts to wane. (via Cotter Crunch)

8. Slow-Cooker Vegan Saag Paneer: Instead of paneer cheese, chunks of tofu dot this spiced spinach stew. Serve with rice or vegan naan to soak up all the glorious sauce. (via Delish Knowledge)

9. Vegan Lasagna Soup: Slow-cooker lasagna means there's no need to cook separate sauces and fillings before assembling. Just dump the ingredients into the slow cooker, and combine with bite-size pasta sheets and cashew ricotta when you're ready to serve. (via Making Thyme for Health)

10. Vegan Black Bean Chili: Most vegan chilis use pinto and kidney beans for bulk, but the complex, earthy flavor of black beans deserves its own rendition. Simmered with smoky chipotle chili powder and other spices, the resultant dish is so savory you'll want to lick your bowl. (via Gimme Some Oven)

12. Slow-Cooker Chunky Money Steel Cut Oats: Bubble the oats overnight in your slow cooker, and you'll have enough to last you for breakfast all week. Top it with a generous helping of nuts, chocolate, and banana. (via Real Food Real Deals)

13. Vegan Mashed Potatoes With Garlic and Chives: These spuds are flavored simply but effectively with 10 cloves of garlic, olive oil, and chives. Be sure to garnish it with a big slab of vegan butter spread. (via Kitchen Treaty)

RELATED: The Beginner's Guide to Slow-Cookin' Everything From Drinks to Dessert