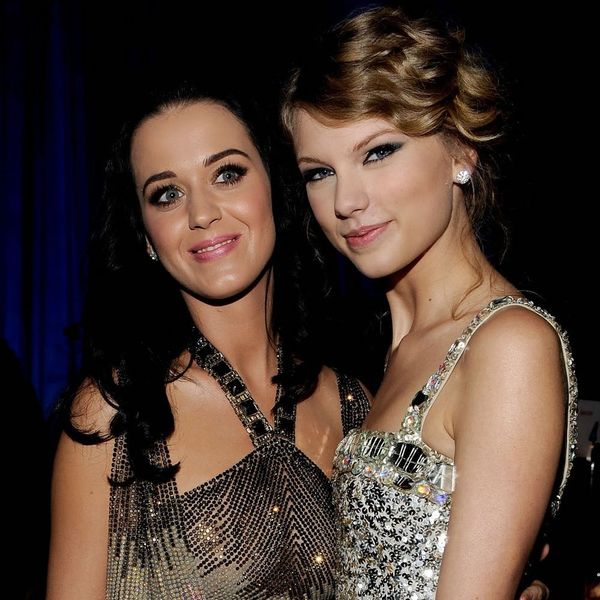 Don’t hold your breath for “Bad Blood” part two: Despite reports that Taylor Swift has been holing up in Nashville working on a brand new album (squee!), there probably won’t be any tracks referencing her former friend Katy Perry in answer to the latter’s latest, “Swish, Swish.”

As you’ll recall, the two musicians have had what Perry calls “a situation” for years now, beginning way back when in 2014, when Swift is believed to have penned her sassy anthem “Bad Blood” about her once-frenemy.

Though the 27-year-old Swift never directly acknowledged that the song was about her rival, she didn’t do much to dispel rumors she sparked with an interview with Rolling Stone, in which she said that it was about a female artist (presumed by fans to be Perry) that “did something so horrible, [she was like], ‘Oh, we’re just straight up enemies.’” That “something” was reportedly stealing backup dancers out from under Swift that Perry had used before, smack dab in the middle of the 1989 tour, after having advised them to add clauses in their contracts that would allow them to bail on Tay when she needed them.

A year later, however, Swift changed her tune when she implied to GQ that it had actually been about an ex. “You sit there, and you know you’re on good terms with your ex-boyfriend, and you don’t want him — or his family — to think you’re firing shots at him,” she said by way of explanation. “I never said anything that would point a finger in the specific direction of one specific person, and I can sleep at night knowing that.”

32-year-old Perry apparently didn’t get the memo, because three years later (!), she’s taken to rehashing the drama, addressing their rumored beef while speaking out about the diss track most believe to be aimed back at the country-turned-pop star.

Though the “Bon Appetit” chanteuse initially took the same vague response as Swift, saying, “There is no one thing that’s calling out any one person,” she seemed to further imply as much with an appearance of James Corden’s Carpool Karoke. “It was a full shut-down, and then she writes a song about me, and I’m like, ‘Okay, cool, cool, cool, that’s how you want to deal with it? Karma!’” she told the host.

But the buck stops here — at least if things are left up to Swift. A source for US Weekly says that she hasn’t responded to any of the latest dregs, because frankly? She’s kind of over it. “She honestly wants no part of this, that’s why she avoids talking about it,” the source revealed. “She doesn’t want to engage.” It makes sense — not only has this feud now spanned years, but she’s got more important things to worry about these days: like a secret new movie star beau.

We’re guessing that means she wont be sending that text Corden suggested she send to end their feud anytime soon, reading, “The beef is off the grill.”

Hopefully, Perry learns to let this one die anyhow.

Are you Team Taylor or Team Katy? Sound off over @BritandCo.

Nicole Briese
Nicole is the weekend editor for Brit + Co who loves bringing you all the latest buzz. When she's not busy typing away into the wee hours, you can usually find her canoodling with her fur babies, rooting around in a bookstore, or rocking out at a concert of some sort (Guns N' Roses forever!). Check out all her latest musings and past work at nicolebjean.com.
Music
Celebrity News
Music
More From Celebrity News