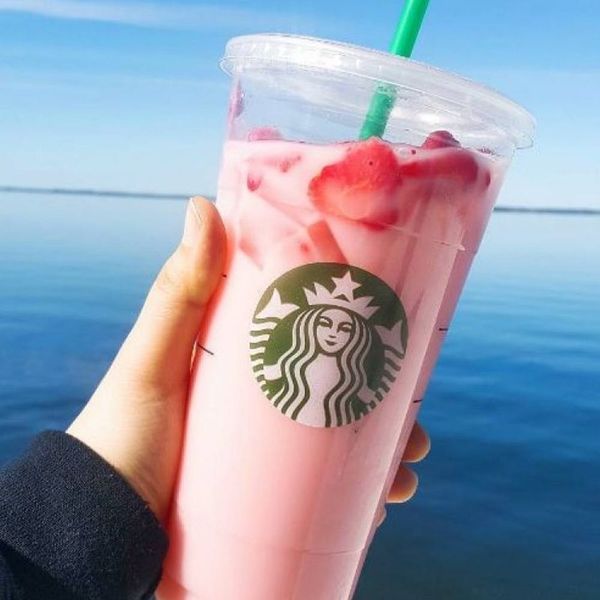 Last summer, the Starbucks-loving world was totally charmed by the Pink Drink — which was quickly followed by the purple drink, orange drink, and full-on drink rainbow. The drink started out on the coffee chain’s secret menu, meaning it wasn’t technically an official Starbucks offering, but if you asked nicely, a friendly barista might whip one up to your specs. But now, anyone who was too timid to opt for an unofficial menu choice can now enjoy the sweet sipping treat, as Starbucks’ viral Pink Drink has now officially joined the menu.

The perfect spring bevvy, the Pink Drink is a lighter option than the caffeine-filled lattés, featuring Strawberry Acai Refreshers® with accents of passionfruit and acai combined with coconut milk, and topped with a scoop of strawberries. It’s perfect for anyone who loves something on the sweeter side.

Vivienne Long, Starbucks vice president of US Retail Beverages, says, “This delicious and refreshing drink is a celebration of our customers’ and baristas’ creativity and is just one of the 170,000 ways we craft beverages to meet each person’s unique taste preferences.” The Pink Drink is available starting today at participating stores across the US, as well as via Mobile Order & Pay.

And while you might think that peeps are over the Pink Drink (ya know, since it basically took a full year for Starbucks to jump on the trend), it looks like fans of the franchise are totally into the addition, leaving comments on Instagram like, “YES!!!!!! about time” and “😍😍 excited to try it!!”

Now the only question is: When will the rest of the colorful drinks be coming to the official menu? We wanna taste the rainbow!

Are you happy that Starbucks has officially added the Pink Drink to their menu? Let us know @BritandCo!