Starbucks Is Bringing a Giant 4-Story Roastery to Chicago 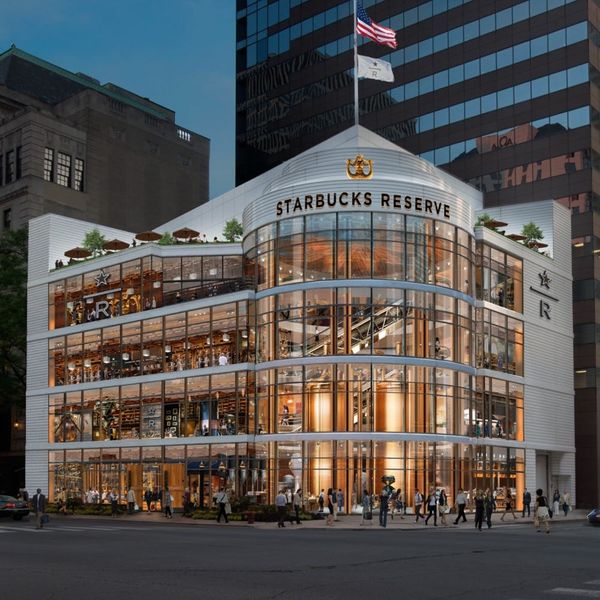 Starbucks-lovers may still be all about the Unicorn Frappuccino, despite the fact that it was a temporary tease of a treat. But now, it looks like the geniuses behind the scenes have other, BIGGER things on their minds. What could be bigger than the wildly viral Unicorn Frapp? Well, that would be the giant four-story roastery in Chicago that’s sure to thrill any coffee fan.

Seemingly similar to their original setup in Seattle as well as their massive 20,000 square foot roastery in NYC, the new Chicago location at North Michigan Avenue will more than double the size of NY’s at a whopping 43,000 square feet. The space will include plenty of spots to enjoy their fresh baked goods, as well as small-batch reserve coffees from all over the world (some of which can’t be found anywhere else) that are roasted, packaged, and brewed on-site in full view of the public.

“Having opened our first Starbucks store in Chicago nearly 30 years ago, our first outside of Seattle, this is a very special city for me,” said Starbucks’ executive chairman, Howard Schultz. “At the time, it was a true test for Starbucks because the Chicago customer is so savvy and discerning about their coffee.” That’s why they’ll surely love the news about this massive new roastery. That is, if it lives up to their high standards, natch.

Opening in 2019, we still may have a while to go, but we’re sure it will be worth the wait for any hard-core coffee-lover.

Are you excited for a Starbucks roastery in Chicago? Let us know @BritandCo!

Desiree O
Desirée O is a ‘Professional Bohemian’ who loves anything and everything related to the arts, entertainment, and pop culture. She ADORES being a ‘Newsy’ for Brit + Co, covering all of the latest tidbits of awesomeness that you want to read about. When she’s not writing, she’s either making messy art, going on long adventurous walks with her camera, or poking around over at bohemianizm (http://www.bohemianizm.com/). You can find out about Desirée O and her work at http://DesireeO.com/ or follow her on Twitter @DesireeO.
Starbucks
Food News
Starbucks
The Conversation
More From Food News