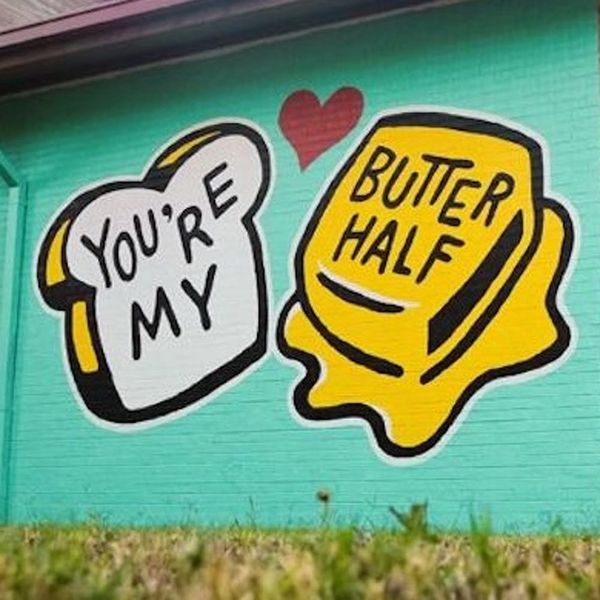 When we’re traveling from one place to another, we never underestimate the power of a great art gallery. But sometimes, particularly when we’re in a big city with countless struggling artists, the greatest find comes in the form of a great piece of street art. Whether it’s yoga art, political statements or something else you’re after, load up the Google Street Art Project and plan out some stops — or just head to one of these destinations, each of which is practically dripping with fresh paint and even fresher visual inspiration.

1. The Z by Library Street Collective: Although popular artist Tristan Eaton is LA based, that doesn’t stop him from spreading his talent to other cities. When the folks behind the Library Street Collective in Detroit invited him and other influential street artists from around the world to come together and make murals for “The Z” as part of a civic revitalization effort, he lent his skills to a piece called “Crime Fighter.” It’s based partly on an old photograph of his mother (Awww!). A hand-drawn card for Mom is one thing, but let’s face it — this mural is a next-level expression of love. (via Street Art News)

2. Highline Park, NYC: Manhattan certainly isn’t hurting for its fair share of art in any form, but if you’re not sure where to take your first bite out of the Big Apple in your quest for visual stimulation, it’s a safe bet to start off in Chelsea. This one near Highline Park depicts Alfred Eisendtaedt’s famous “V-J Day in Times Square” photograph. (via The Vandalist)

3. You’re My Butter Half: We love a good pun, and there’s no cuter one to be found than the “You’re My Butter Half” wall at Martin Luther King, Jr. Blvd. and Alamo Street on Austin’s East Side. An increasingly popular site for engagement photos (for obvious reasons!), the wall was painted on the side of a United Way building as part of the nonprofit’s 2012 rebranding with local partner Creative Suitcase. It’s a stone’s throw away from plenty of other great street art in Central and East Austin, a city teeming with talented street artists. (via Creative Suitcase)

4. HOPE Outdoor Art Gallery: Speaking of Austin, it’s becoming something of a street-art mecca all its own, so it’s no surprise that the city is home to one of the largest outdoor galleries in America. Made possible by community partners like the HOPE Campaign, Obey Giant Art and Shepard Fairey himself, the three-story living exhibit (also known as the “Baylor Street Art Wall”) hosts a constantly evolving array of art from local artists of every stripe. The project was developed “to provide muralists, graffiti artists and community groups the opportunity to display large-scale art pieces driven by inspirational, positive and educational messaging.” Can’t argue with that for a second. (via HOPE Campaign)

5. Rainbow Stairs: You might not find yourself in Istanbul often, but if you ever do, be sure to find its iconic set of rainbow stairs at some point as you wander through. Located near Findikli Station, the stairs were painted simply to bring happiness to passersby when a forestry-engineer-turned-guerrilla-artist spent four days and $800 transforming the steps into a global point of interest. When the local government painted over them shortly thereafter, a public outcry (including countless people painting their own steps in a show of solidarity) led them to reinstate the rainbow effect. Talk about the power of the people, right? (via Almost Landing)

6. Hosier Lane: Wildly popular artist Tyrone “Rone” Wright is such a notable fixture in Melbourne’s street-art scene that he was featured in Australia’s first feature documentary on the subject. So, it’s no surprise, of course, that his work appears in one of the more concentrated areas of graffiti around the Aussie metropolis. Spanning blocks of cocktail lounges and countless works of art, the spectacle has become a major attraction in recent years. (Photo via LWN Photography/Tumblr)

7. Exhibition Street: While Hosier Lane may be a more well-known street art destination in Melbourne, the Fitzroy neighborhood just northeast of city center is no shrinking violet either. In particular, Exhibition Street holds a visual smorgasbord of delights from not just Rone, but other artists as well, including Ghostpatrol, whose crisp, high-contrast line art is worthy of its own recognition. (via The Culture Trip)

8. Dreamcatcher: Peruvian street artist JADE’s work can be seen from Mexico to the Dominican Republic, but his home city of Lima is the primary beneficiary of his aviary-inspired designs. This piece, called “Dreamcatcher,” can be found in the district of Chorrillos and features a life-sized child hugging a giant, beautiful bird. While Lima’s mayor has ordered that all murals created during his predecessor’s rule (around 20 total) are to be painted over with the bright yellow color of his own political party, an uprising has come together to protect them, involving everything from the hashtag #SalvemosLosMurales (“we rescue the murals”) to folks forming human fences in front of the murals themselves. (via Street Art News)

9. Smashbox Studios in Culver City: This Higueroa Street corner has seen more than its fair share of Instagram snaps, thanks to its installment of artist Curtis Kulig’s popular “Love Me” series. As an added bonus, it’s just two doors down from a subtle but sweet piece of public art called “Children in Flight,” where metal doves adorn the side of a neighboring school. Often imitated but never quite duplicated, Kulig’s work provides the perfect backdrop for many a solo, double or group selfies. And why not? When love is all around, sometimes you can’t help but capture the moment. (via Los Angeles Magazine)

10. Centre-Fuge Public Art Project: There may be no city in America more densely packed with art than New York City, and one of the most inspiring places to see it there for free is the Centre-Fuge Public Art Project at 1st Street and First Avenue. Since January 2012, it has hosted bi-monthly street art exhibitions by applicants of all kinds on the once-plain construction trailer. Its popularity shot up with a memorial mural of Beastie Boy MCA by artist Danielle Mastrion, and its ever-changing array of visuals have become a must-see. (via Time Out New York)

11. Clarion Alley: With origins dating back to 1992, the Clarion Alley Mural Project was formed by six North Mission residents. This one-block stretch of bright, bold art can be found between Mission/Valencia and 17th and 18th Streets. Featuring the work of more than 100 artists over the years, its contributions to cross-cultural dialogue are reason enough to pay it a visit; the glorious artwork itself is, of course, a nice added bonus. (via Street Art SF)

12. West Hollywood Library: A street art post isn’t complete without the work of Shepard Fairey, who singlehandedly thrust the medium into the national spotlight with his historic presidential “Hope” campaign designs in 2008. In 2011, adding to his many murals around Los Angeles, he completed work on the West Hollywood Library, a structure that won an outstanding achievement award the following year from the US Conference of Mayors. Not too shabby, really. And hey, if you visit, why not pop inside for some literary inspiration too? (via Birdman Photos/Flickr)

What are your favorite places to get inspired by stunning street art? Tell us in the comments!

Amy Lynch
Amy is a freelance writer and editor, telling the stories of progressive people and projects that move the world forward. Her work has appeared on The Hairpin, Refinery29, Citygram and more, and she's developed content for the likes of Alternative Apparel, Milkshake and Silvercar. She lives, works and plays with her fiancé and their dog, Bogey, in the weird, wild heart of Austin, Texas.
Art
Home News
Art Photography street art