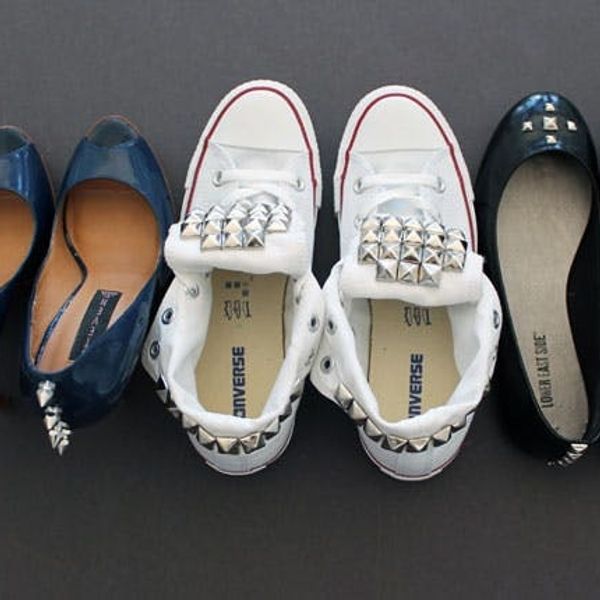 Studs are officially back. Call it a throwback to 80s and 90s punk princesses, an edgier version of the bedazzler, or a tougher take on bling. Whatever your angle, if you’re looking for a way to trick out old or boring shoes, we’ve got 3 easy ways to make ’em studly.

For shoes, we found this pair of Steve Madden pumps at Goodwill, bought a brand new pair of Converse, and picked up these sweet little flats at none other than Payless!

First, let’s fashion up those flats.

Use a safety pin to pre-punch holes where the studs will go. Push studs in, use pliers to fasten on the inside of the show, and repeat.

For the top, do the same thing but use a spoon at the end to smooth all of the stud edges up into the top of the shoe.

You can still rock these at the office, but now they double as concert footwear as well.

Though we love our ankle booties, the best thing about high top chucks comes from folding everything down.

Fold down the back edges and the tongue, and get your studs out. Stud the tongue flap as much as you like. Add a row along the back, and that’s it.

These are perfect for would-be b-girls and we love the tough take on such a classic pair of canvas sneaks.

And last, a pair of killer pumps.

These are actually the easiest but do require a grommet tool for punching holes.

Punch four holes down the back spine of the shoe. Screw in your stud spikes, and you’re done.