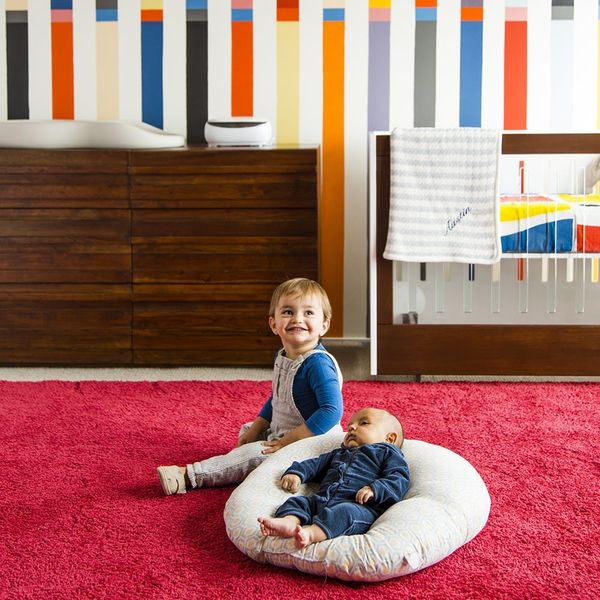 It happened! Again. I gave birth to my second child Austin, little brother to Ansel, in 2016!

While pregnancies can be long and difficult, I made the most of my second go around by staying as busy as possible. I traveled around the world (literally) throughout each trimester while working on some special projects and partnerships for B+C. I indulged my team by modeling my bump in a fun series showcasing eight maternity Halloween costumes. And, of course, I chased around my new toddler, Ansel, which kept me busier than anything else.

I also had the chance to take a few days off for a babymoon with my husband, Dave. Given the Zika virus was rampant last year, our vacation ended up being a simple road trip on the California coast where we decided to stop off at all the greatest architecture and design locations along the way. (We are both huge design geeks.) We were most excited to visit the home of famous design couple, Ray and Charles Eames. You may know them by their famous “Eames chair” design that has become so popular:

Beyond chairs though, they were one of the original icons for mid-century modern design in the ’50s and especially loved color and pattern — just like me! (Seriously, you guys, their place is definitely worth a visit if you’re ever in the LA area.) I was so inspired by the colorful graphics and textiles, as well as the sleek, simple mid-century furniture. It was during that trip when I decided to make Baby #2’s nursery an ode to Eames design.

Here’s the original illustration by Charles Eames that I spotted from one of his old pieces of work. It became the signature piece of inspiration for the nursery:

And here’s the final outcome:

Keep scrolling to see how I used 20 different paint colors and various DIY projects to make my dream nursery!

Aside from our visit to the Eames’ home, Dave and I pulled inspiration from our personal library of Eames books to plan and execute the space. Our first project was to re-create a hanging textile design that Ray Eames used in her own home (and featured in the book) as a painted statement wall.

To achieve the various colored stripes in the wall perfectly, I measured the wall and picked a stripe width that evenly divided into the wall’s length. The perfect size for Austin’s room ended up being 20 four-inch stripes. From there, I used a plumb bob to pencil straight lines onto the wall, added painters tape to mark those stripes and ran a horizontal band of two-inch tape the length of the wall to mask off the middle stripe section. Once all of the prep work was done, the fun began — painting! All I needed was a paint pan and a six-inch roller for every color. Note: Let me be super clear — this was a BIG endeavor and one that I do not necessarily recommend 38-week pregnant women to do on their own. I was exhausted! However, the outcome blew away my expectations, and many months later, I still feel like it’s the cheeriest, happiest room in the house. So maybe those aching feet were worth it? :)

These days, one of the boys’ favorite spots in the room is the soft, high pile red rug that covers a good portion of the room. (A score from Target! It’s by the Pantone brand and is actually very high quality despite the low price.) The rug gives Ansel and Austin a roomy, comfortable area to hang out and play on. Oh, and it makes for the perfect bold space for photos… which I take way too many of.

One of my fave decor pieces is the pegboard wall. I found this from a small startup online and loved how modern it looked. It’s such a statement piece and allows for plenty of flexibility, allowing us to keep things out of reach at the moment but within reach as Austin grows. I filled the shelves with everything from adorable baby shoes to DIY photo frames and baby books. It’s such a statement piece!

My favorite DIY element of the nursery is the mid-century mobile. Using only various colored felt balls, bamboo kitchen skewers and elastic jewelry cord, this 30-minute $10 DIY project is the perfect distractor during Austin’s diaper changes.

I love my womb chair, made by mid-century designer Eero Saarinen, so much I wanted to incorporate it into the nursery as a rocking chair. So I had a local woodworker create custom rocker legs *and* got a mini rocker reproduction of an Eames design for Ansel to hang in while I’m nursing Austin.

The final outcome of the nursery, with its mid-century modern design and not overtly childlike decor and colors is the perfect space for Austin to grow up in without too much need for redecoration. Heck, I may even be open to crashing in his room every once in awhile! Seriously though… the colors.

Want to take a deeper tour of Austin’s Eames-inspired nursery? Tune into Brit IRL: Cribs Edition below and find even more behind-the-scenes action on Better Homes and Gardens.

Looking for even more room inspiration? Make sure to check out Ansel’s totally DIYed nursery and my former home gym, now multi-use space for decor ideas.