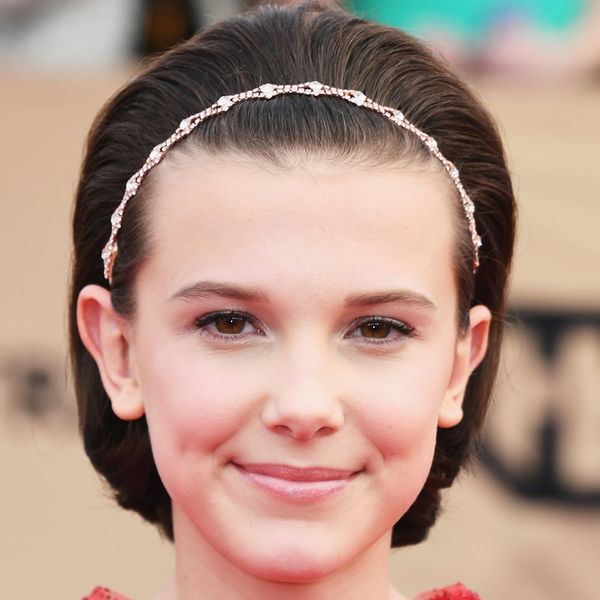 We’ve made our predictions for fashion winners this evening and taken a look back at some of the show’s craziest looks to date, and now, it’s here: the 2017 SAG Awards red carpet. From bold prints (Michelle Dockery, Samantha Isler) to modest updates on the sheer trend (Claire Foy), stars offered plenty to look at: Check our must-sees below!

The OITNB star showed off her new cotton-candy pink ‘do, giving some edge (along with her arm tat) to her mostly plain plum ensemble. (Photo via Dimitrios Kambouris/Getty)

4. Annalise Basso: Annalise had some fun on the carpet with the flowing cape sleeves on her off-the-shoulder bright red satin gown. (Photo via Dimitrios Kambouris/Getty)

You’d never know that OITNB’s Jackie Cruz normally dons prison garb for her role on the show after seeing the knockout black off-the-shoulder Celia Kritharioti dress she rocked on the red carpet tonight. Topping things off with a classic red pout and jewelry by Kimberly McDonald (I mean, those earrings), girl looked positively STUNNING. (Photo via Frazer Harrison/Getty)

Maisie has been killing the game lately — not only did she absolutely slay the Globes carpet, but she’s doing it again tonight in this lovely silk satin dress which pairs perfectly with her finger-curl waves and vampy lips. (Photo via Dimitrios Kambouris/Getty)

11. Sophia Bush: Sophia Bush was pretty in pink, reminding us of a modern-day Marilyn (or “Material Girl” era Madonna) in this strapless structured Marchesa dress. (Photo via Frazer Harrison/Getty)

Emily Blunt jumped on one of 2017’s earliest trends in a nude piece by Roberto Cavalli that made it hard to tell where the dress ended and her skin began. (Photo via Dimitrios Kambouris/Getty)

13. Laura Carmichael: Laura’s simple black dress was made to pop thanks to the bright floral appliqué threaded throughout. (Photo via Frazer Harrison/Getty)

15. Kaley Cuoco: In one of the more high-fashion looks of the night, Kaley’s Marchesa dress was a sherbet dream, with hints of green and blue near the bottom of her lacy tulle. (Photo via Frazer Harrison/Getty)

17. Natalie Portman: Also donning Dior was Natalie Portman, who is, quite literally, ready to pop (though you may not be able to tell beneath the mounds of fabric this dress affords). Those sleeves, though! (Photo via Alberto E. Rodriguez/Getty)

19. Taraji P. Henson: The always outspoken Taraji was every bit as bold on the carpet tonight as she is IRL — get a load of the see-through Reem Acra blush pink gown she turned heads in! (Photo via Frazer Harrison/Getty)

Janelle’s look has never been conventional (you might recall the signature and androgynous menswear looks she rocked on the reg toward the start of her career), and the Hidden Figures presenter isn’t making any exceptions for awards season: Just see her high-necked black and white floral midi-length gown for proof. (Photo via Frazer Harrison/Getty)

21. Brie Larson: The normally prom-ish Brie Larson blew us away in something a bit more sophisticated tonight, thanks in large part to designer Jason Wu and his white-hot asymmetric design. STUNNING. (Photo via Frazer Harrison/Getty)

We couldn’t care less about Barb on Stranger Things RN — tonight, it was all about Nancy (AKA Natalia Dyer), who was a vision in her form-fitting red frock with its pink floral scoop neck. (Photo via Frazer Harrison/Getty)

Alexander McQueen can do no wrong, and Emma Stone’s romantic, piece-y floral number is proof. (PS — did we call it with sophisticated and black, or what!?). (Photo via Alberto E. Rodriguez/Getty)

27. Nicole Kidman: We are absolutely bowing down to Nicole Kidman, who looked like a GD queen in this emerald-hued Gucci extravaganza she wore. IT HAS PARROT SLEEVES, PEOPLE! Parrot sleeves! We’re dead. (Photo via Dimitrios Kambouris/Getty)

Nicole Briese
Nicole is the weekend editor for Brit + Co who loves bringing you all the latest buzz. When she's not busy typing away into the wee hours, you can usually find her canoodling with her fur babies, rooting around in a bookstore, or rocking out at a concert of some sort (Guns N' Roses forever!). Check out all her latest musings and past work at nicolebjean.com.
2017 Style Trends
Celeb Style
2017 Style Trends Red Carpet
More From Celeb Style