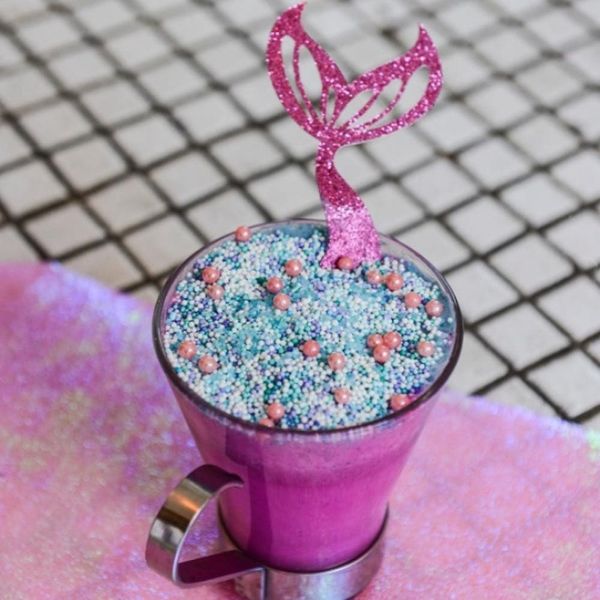 Move over, unicorns — mermaids are here to have their coffee-based moment. Though the mythical horned creature has seemingly had an edge over its sea siren counterpart as of late, no doubt in large part thanks to the popularity of its Starbucks frapp (which has actually incited a lawsuit), our favorite finned creature is here to take over. Say hello to the Merbabe Latté: your next babe-licious IG obsession.

Created by Brooklyn’s The End (yep, the same folks embroiled in a suit with Starbucks over its similarly named treat), the Merbabe Latté (which you can also order as a Merbabe Iced Latté, if you wanna get fancy) is available via the café’s alchemy bar and was given its name because most of its ingredients come from the ocean. It’s also much healthier than its unicorn predecessor, including healthy ingredients such as schizandra berry, marine collagen (said to be great for your skin), coconut milk with blue-green algae, co-co foam, and kelp flakes. We also spy red dragonfruit in one featured pic, which would help to explain its sumptuous color!

Weekend vibes... shout out to all the strong and empowered merbabes out there who inspire us daily. Keep making waves 💪🏽 🌊 📸: @liz01

The End’s co-owner Madeleine Murphy told Elite Daily that her inspiration for the drink actually goes far beyond mermaids, saying, “All the drinks I come up with, I like them to have a purpose and really kind of excite people. I’m constantly surrounded by the most inspiring women ever, and I think right now the ‘Future is Female’ movement is very real, and I just keep seeing all these people doing everything from having a family to running a business, starting activism movements, creative types.”

Her soul was too deep to explore by those who always swam in the shallow end 🌊 . . . 📸: @liz01 #merbabelatte

She added, “I’m just so drawn, to like, ‘What’s a drink that really helps support these awesome females in my life, sort of on every level to nurture them physically? Your physical health, your emotional health, your spiritual health, your hormonal health’ — so I started looking up some of my favorite ingredients that I’ve used for that.”

Starbucks yet again appeared to have a similar thought, introducing its mer-name first with their Mermaid Frappuccino. Coincidence? Perhaps.

Still, we’re sure both are delicious in their own special ways!

Do you like the look of the Merbabe Latté? Let us know @BritandCo!

Desiree O
Desirée O is a ‘Professional Bohemian’ who loves anything and everything related to the arts, entertainment, and pop culture. She ADORES being a ‘Newsy’ for Brit + Co, covering all of the latest tidbits of awesomeness that you want to read about. When she’s not writing, she’s either making messy art, going on long adventurous walks with her camera, or poking around over at bohemianizm (http://www.bohemianizm.com/). You can find out about Desirée O and her work at http://DesireeO.com/ or follow her on Twitter @DesireeO.
Coffee
Food News
Coffee
The Conversation