These 2 Golfers Are Calling Out the LPGA’s New Dress Code for What it Is: Totally Sexist 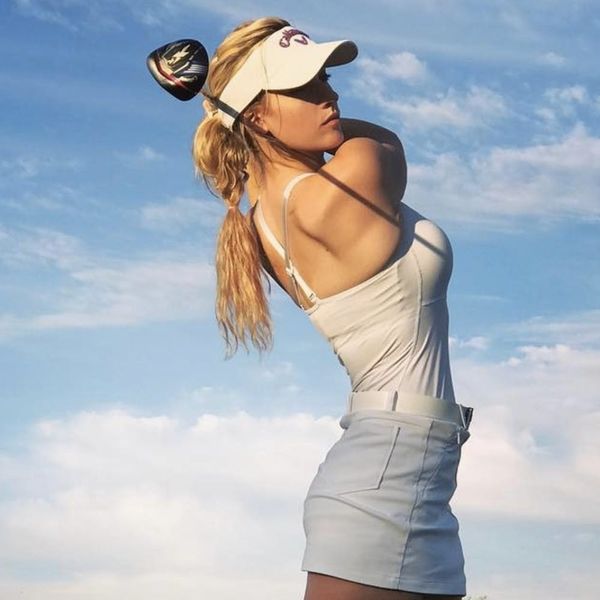 No leggings, no racer-back tanks, and your skirt or shorts better cover your bum at all times — whether you’re standing, sitting, or bending down. Nope, this isn’t an excerpt from an old handbook for an all-girls school run by nuns. It’s the LPGA’s brand new body-shaming dress code that dictates what their players should wear on (and in some instances even off) the golf course.

The new code, which came into effect this month, bans all of the above and more, including “plunging necklines” and “workout gear” (whatever that means). The restrictions are so vague and numerous that it would have been simpler if the association had told players what they can wear. What is clear, however, are the serious fines that will be imposed on women who violate the code: $1,000 for a first-time infraction, and double that for each subsequent violation. And this in a sport where female players already earn 83 percent LESS than male players.

Late last week, pro golfer Paige Spiranac wrote an op-ed piece in Fortune calling out the league for its sexist and discriminatory code, which she says singles out women with certain body types, shaming them for dressing in whatever way they’re most comfortable on the course.

“To be a professional golfer in the 21st century, you must be an athlete,” says Spiranac, likening the new regulations to early 20th-century guidelines restricting how hard and far female golfers should hit a golf ball — so as not to make a spectacle of themselves executing a particularly vigorous swing (insert eye-roll here).

She points out that, as sports technology has advanced, the way athletes dress has evolved — and the changes have enabled competitors to take their sports to new heights of athleticism and set new records. Putting unnecessary restrictions on what competitors wear is seriously limiting, for the players and the sport as a whole.

Spiranac also addresses the code’s implicit body-shaming aspect: “In a world where women are continually and unwantedly sexualized, this new rule serves as yet another reason for women to feel ashamed of their bodies, and a reminder that to be respected, they must alter their behavior because of outside perception,” she says. “If professionalism in golf equals athleticism, then athleticism should be promoted and showcased, and that means allowing the clothes that promote it. By labeling women as looking ‘unprofessional’ when showing cleavage or shorts worn under a skirt, the LPGA is perpetrating the outdated stereotypes about the connection between what a woman wears and her morals, as well as insinuating that women do not have control over the perception of their bodies, but rather that they must bend to the every whim of the male gaze.”

The league’s third-ranked player, Lexi Thompson, took a different approach in protesting the dress code. She used her Instagram account to tell her nearly 300,000 followers exactly what she thought of the guidelines by taking Throwback Thursday to another level with this photo, captioned: “Got my new #LPGA dress code compliant ⛳️ outfit ready to go! 😂#throwbackthursday#kidding#funny#joke”

All joking aside, golf — and the clubs the sport is played in — have a history of slow to non-existent progress-making when it comes to issues of gender, access, and ethnicity. By speaking out against the LPGA’s attempt to exercise control over its players, Thompson and Spiranac are refusing to accept a step backward.

What do you think about dress codes for athletes? Let us know on Twitter!

Corrina Allen
Corrina Allen is a film + television + travel writer from Toronto. Her journalistic goals include a backstage interview with David Byrne, the fictional character she identifies most closely with is John Wick, and her favorite dead person is Vladimir Nabokov. She never, ever Instagrams photos of her food (just her dog).
Ladies First
Current Events
Ladies First
More From Current Events