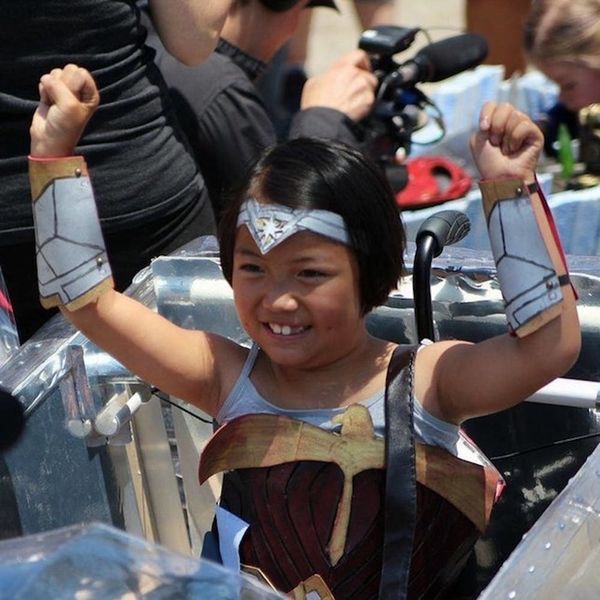 Whether DIY-ing one for yourself or for your squad, making Halloween costumes is one of the best parts of the season. Ryan and Lana Weimer know this firsthand — they’ve not only been making cool costumes for their own sons for years, but through their nonprofit, Magic Wheelchair, they now make mega-elaborate costumes year-round for kids in wheelchairs.

It all started in 2008, when the Weimers’ oldest son Keaton, then three, said he wanted to be a pirate for Halloween. Keaton — along with two of the Weimers’ other five children, two of whom they have sadly lost — was born with a rare kind of muscular dystrophy called spinal muscular atrophy, and had gotten his electric wheelchair that year. An eye patch didn’t seem like quite enough for a pirate costume, so Ryan built an entire pirate ship for Keaton’s wheelchair.

“It’s just amazing how people saw him differently,” Ryan tells Brit + Co on the phone from his home in Oregon. “There’s an awkwardness around disability and people that are different. People don’t know what to say or do, so often they just stare awkwardly. It’s not malicious, it’s just how we are in society, unfortunately.”

“But when that costume was on, that awkwardness just disappeared. It blurred the disability barrier and created inclusion. People saw my son how I see him all the time — just a really cool kid.”

Ryan remembers how emotional Keaton’s reaction made him, and he immediately started wondering how he could help other families and kids have the same experience. Now, Magic Wheelchair is an official non-profit with 40 teams of volunteers making upwards of 50 chairs a year for kids across the country.

One of the biggest projects of the past year was putting a Justice League costume together. Six builders led the charge in building the badass wheelchairs under a tight timeline. In the end, the chairs were completed in time, and six little superheroes got to reveal the chairs at San Diego Comic-Con, where they were greeted warmly by fans — including MythBusters‘ Adam Savage.

“I don’t think the kids really wrapped their heads around what we were building for them, but when they saw them, the shock and awe from both the kiddos and the parents was awesome,” Ryan says. “They were superstars that whole day. It was a really amazing experience.”

Beyond bringing smiles to kids’ faces, Ryan says Magic Wheelchair has managed to do something he couldn’t have even imagined in the beginning: It’s erasing barriers and it’s bringing communities together.

“We’re able to help strengthen communities, to help people get involved doing something good for kids in their community. It’s grown so much beyond the goal of making kids smile. It’s magical,” he says.

The waitlist for chairs is currently at around 150 kids, and Ryan encourages people who are able to donate (which you can also do through their Facebook page) or volunteer to help Magic Wheelchair achieve their mission of building a special chair for every kid. And when you hear Ryan talk about the effect of the chairs on the kids you use them, it’s not hard to see why.

“One of the kids we built for saw himself in the mirror, and said, ‘Finally! People are going to see me for being a badass and not just a kid in a wheelchair,'” Ryan recalls. “That’s it right there. That’s the experience we want them to have. For people to look past that wheelchair, look past that disability, and see them as they are. They have a different way of getting around and doing things, but they’re still great, amazing kids. They’re inspiring.”

What do you think of the Magic Wheelchairs? Let us know @BritandCo!

Nicole Villeneuve
Nicole is an entertainment and lifestyle writer covering pop culture, news, and cool women doing cool things. She likes yard sales, MTV's Teen Mom, and putting too many memes in the group chat. She lives in Toronto.
Every Body
Diversity
Every Body inclusivity
More From Diversity