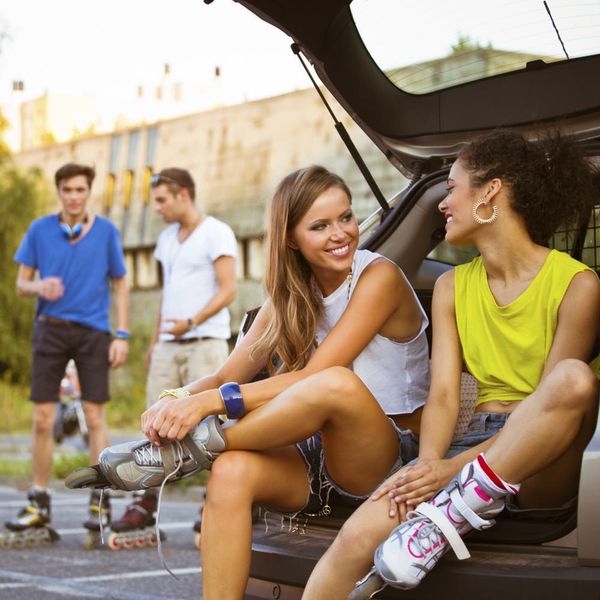 If you’re looking for ways to keep the fire burning with your boo or get one started with a new bae, coming up with creative date night ideas can be one of the best ways to show your S.O. some love. And, with serious Pokemon Go players taking over our streets (and malls and offices and bike paths and… need I go on?), we’re all feeling a little nostalgic for the ’90s. So we traveled back in time to the best decade ever – the ’90s – and pulled some serious inspiration for 10 fail-proof, nostalgia-inducing and super fun date nights.

1. Go rollerblading. Head over to your local sports consignment store and pick up a pair of blades, then hit the local trail to take in some killer views of your city. Windbreakers only add to the experience, and we wouldn’t hate it if you ended your rollerblade date with a viewing party of the Disney Channel classic Brink! either.

2. Battle it out on Nintendo 64 or Sega. Don’t feel like leaving the apartment or house? No problem. Insert your favorite gaming station here. Video games took on a life of their own in the ’90s, and with choices ranging from Mario Brothers and Sonic to Crash Bandicoot and Donkey Kong, you can make an entire day of going head-to-head over your favorite characters. Nintendo and chill, anyone?

3. Go for a joy ride in a Dodge Viper. Wanted to impress your date in the ’90s? You rolled up in a Dodge Viper. If you and your babe are really feeling wild, head to your local rental car shop and see if they have one you can take out for the day. You’ll feel like a million bucks, even if you’re just riding around town running errands. Bring your Polaroid along for some great snaps.

4. Check out a cover band. When it came to the musical preferences of the ’90s, it was all about two genres: grunge and hip hop. Check your local music venues to see if any Nirvana or Naughty by Nature cover bands are coming through town and make a Spotify playlist in advance to get you and your date ready for the big night. Double points: Checking out Weezer (formed in ’92) cover band The Undone Sweaters, which The Adventures of Pete and Pete (yes, the ’90s Nick classic) star Danny Tamberelli plays bass in.

5. Host a horror movie date night. Jodi Foster took home an Oscar in 1991 for her breakout performance in Silence of the Lambs, and if that’s not reason enough to dedicate date night to the movie, just think about how close you’ll need to get to each other when the real scary parts come on. This decade really brought the horror game, churning out iconic films like Interview With a Vampire, Candyman, The Ring, Scream and I Know What You Did Last Summer.

6. Catch ’em all. Unless you’ve been living under a rock (which, in all honesty, there are probably so many Pokemon hiding there), you know that Pokemon are currently taking over the world…. again. Grab your S.O., ride around town and start capturing. A little flirty competition never hurt anyone.

7. Have a Disney movie marathon. Hot button statement coming at you, but we think Disney may have peaked in the ’90s. Let’s just name a few: Aladdin, Toy Story, Beauty and the Beast, Pocahontas, A Bug’s Life and The Lion King. Grab your boo and your favorite prince or princess and get ready for some seriously sexy duets. Bonus points if you watch them on VHS.

8. Have a pop band dance party. With amazing groups like Destiny’s Child, *NSYNC, Backstreet Boys AND the Spice Girls all hitting the scene in the same decade, it would be honestly kind of disrespectful to not dedicate an entire night to these boy band and girl band jams. Slow it down with classic hits like “I Do (Cherish You)” and “I Swear,” and we guarantee the feels will be flowing in no time.

9. Play pogs. We may have saved the best for last here. If you weren’t collecting pogs in the mid-’90s, then what were you doing? Scour eBay or hit up your local thrift store and get ready to throw down with your boo. Whip up some White Russians to keep with the milk theme (pogs were originally milk bottle caps), and you’ve got yourself quite a night.

Kelsey Nelson
Kelsey Nelson is a born-and-raised Ohioan living life in South Carolina. She thrives at binge watching Netflix, contemplating what to order at the bar and running any trail or road she can get her feet on. In addition to being a Brit + Co contributor, she writes about southern pleasantries, DIY mishaps and more at North Living South. If she isn’t writing or running, she’s off adventuring with her husband Brad and their Lab/Dachshund mix, Gordy.
90s
Relationships
90s Date Night
More From Relationships