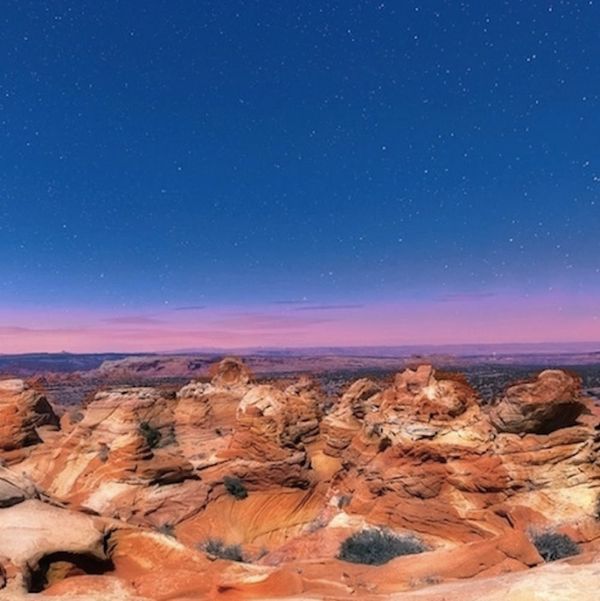 When it comes to vacations, some of us prefer sticking to big cities and living in the lap of luxury, while others would rather rough it and experience life on the open road. Both parties can’t help but agree that a jaw-dropping view is often worth the effort it takes to find it. So to add even more to your bucket list, we’ve rounded up some of the most eye-popping destinations on the planet. So beautiful, in fact, that visitors sometimes forget they’re still firmly planted on Mother Earth. And the best part? Some of them are right here in the good ol’ U. S. of A. Pack your bags and let’s go!

1. White Sands National Monument: If you don’t think surfing the slopes of the world’s largest gypsum dune field sounds like fun, you’ve clearly never tried. Covering 275 miles of New Mexican desert, this is one national treasure you’ll have to see to believe. (Photo via daveynin/Flickr/Creative Commons)

2. Reed Flute Cave: If you ever find yourself in Guilin, China, treat yourself to a tour of this earthly delight. The cave is filled with geological formations owing their beauty to thousands of years of water moving against limestone. (Photo via John Roberts/Flickr/Creative Commons)

3. The Maldives: Remember that planet in the movie Interstellar that was entirely made of water? The Maldives, 26 gorgeous natural atolls found in the Indian Ocean, are almost exactly like that… except not terrifying. (via VisitMaldives.com)

5. Metropol Parasol at Setas de Sevilla: It looks like an intergalactic space station straight out of the future, but in reality, it’s the world’s largest wooden structure, also known as the Metropol Parasol in Seville, Spain. Although it feels light years ahead of its time, it was officially opened in 2011 as a canopy over a popular Andalusian shopping area. (Photo via Metropol Parasol/Facebook)

6. Petra: One of Jordan’s most popular tourist attractions, the lost city of Petra boasts a breathtaking series of tombs cut from the area’s mountainsides. The UNESCO World Heritage Site has even been named one of Smithsonian Magazine‘s “28 places to see before you die.” From the photos alone, we completely understand why. (Photo via Visit Petra/Facebook)

7. Tschuggen Grand Hotel: A health retreat at a Swiss hotel sounds heavenly in and of itself, but this particular property in the town of Arosa, Switzerland literally takes the experience to new heights. Its slice-like structures jut out of the ground and illuminate the snowy landscape after nightfall in a scene that looks as if it’s of another world entirely. We wouldn’t mind checking in for, oh, a year or two at least. (via Tschuggen Grand Hotel)

8. Pamukkale: Although they look like a snowy staircase descending from the heavens, these naturally occurring terraces are formed by travertine and hot springs. One of the major cities of the Byzantine period, Pamukkale can be found in the Turkish province of Denizli, and believe it or not, it’s available for tourists to explore on foot. (Photo via Ana Raquel S. Hernandes/Flickr/Creative Commons)

9. Moab: Known to most as the home of Arches National Park, this Utah city is teeming with natural beauty. Its vistas stretch as far as the eye can see, encompassing red rock formations and snow-covered mountains in the distance. Everything here is so wild and full of color, even its dead vegetation looks artistic. (via Discover Moab)

10. Vermilion Cliffs National Monument: With elevations ranging from 3,100 to 7,100 feet, the vast wilderness of this 280,000-acre Arizona monument is something to behold. Its conditions can be so harsh that parts of it require a permit just for hiking. If that doesn’t qualify as unspoiled nature, we don’t know what does. (Photo John Fowler/Flickr/Creative Commons)

What’s the most otherworldly place you’ve ever been? Share in the comments below!

Amy Lynch
Amy is a freelance writer and editor, telling the stories of progressive people and projects that move the world forward. Her work has appeared on The Hairpin, Refinery29, Citygram and more, and she's developed content for the likes of Alternative Apparel, Milkshake and Silvercar. She lives, works and plays with her fiancé and their dog, Bogey, in the weird, wild heart of Austin, Texas.
Home News
More From Home News