23 Dreamy Vegan Recipes Made With Cashews 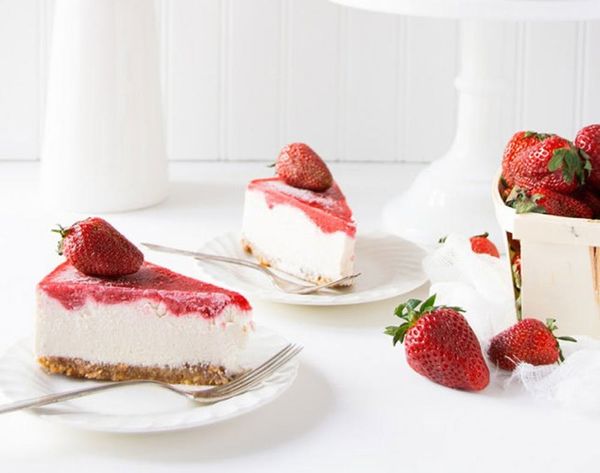 Behold. The secret behind creating so many terrific vegan recipes is a wee, C-shaped nut: the cashew. It can morph from being the key ingredient in a fantastic peanut butter alternative to a worthy, non-dairy cheese with ease. It’s hard to believe that these 23 incredible cashew recipes, for everything from cheesecake to caramels, are totally plant-based — but believe it.

1. Strawberry-Vanilla Bean Raw Vegan Cheesecake (Gluten-free): No worries about this cheesecake developing a crack in the oven, because, well, there’s no baking required! (via Sift and Whisk)

2. Vegan Chocolate Fudge Popsicles: Your favorite frozen fudge pop gets a vegan makeover with this fruit-sweetened recipe. (via Half Baked Harvest)

3. Cashew Cream Caramels: Let’s just say that one more time, real slow: Cashew. Cream. Caramels. With just as lush a texture as their heavy cream-laden counterparts, it’s hard to believe that these caramels are vegan (just be sure to use a vegan buttery stick, like Earth Balance).

4. Vegan Cashew Sun Dried Tomato Dip: The possibilities are endless when it comes to making this creamy dip your own. Whether you scoop it up as-is with crackers or thin it with pasta water to create a sauce for al dente noodles, you can’t go wrong. (via Bojon Gourmet)

5. Vegan Pumpkin Alfredo Linguine: There’s nothing we like more than curling up with a nice bowlful of creamy pasta when the weather turns chilly. Featuring pumpkin, this just may be the recipe we turn to this season. (via Veggie and the Beast)

6. Milk Chocolate Cashew Butter: Switch up your Nutella game with this DIY chocolate-hazenut butter. Don’t mind if we do! (via How Sweet It Is)

8. Vegan Mozzarella Sticks: Transform homemade, vegan mozzarella into these ever-popular melty-middled sticks that are the perfect snack for Super Bowl Sunday and beyond. (via Vegan Richa)

9. Turkish Coffee Ice Cream: Never ones to pass up coffee, we’d love to get a couple scoops of this cashew and almond milk ice cream freckled with an added caffeine boost in the form of finely ground coffee. (via My Darling Vegan)

10. Oat Cashew Thumbprint Cookies With Berry Chia Jam: These cashew and oat cookies are packed with enough healthy stuff — we’re talking whole foods only here — that you can sneak a few for breakfast guilt-free. (via This Rawsome Vegan Life)

11. Balsamic-Roasted Peach Crostini With Cashew Cheese and Basil: Roasting peaches is a terrific way to coax out even more of their sweetness (and is a great way to salvage not-quite-ripe fruit). Coupled with a chiffonade of basil and spread of creamy cashew cheese, these apps are certain to disappear in a flash. (via Dishing Up the Dirt)

12. Vegan Cream Cheese With Herb and Garlic: Enjoy this cheesy-tasting-yet-somehow-cheeseless cream spread atop a bagel or as a game day dip with chips. (via Katy’s Kitchen)

13. Overnight Buckwheat Cashew Parfait (Gluten-free): Packed with protein, fiber and healthy fat along with a ton of bright colors, these parfaits are a terrific way to energize your morning routine. (via A House in the Hills)

14. Roasted Chickpea and Avocado Tacos With Lime Crema: We’re loving the melange of hues and textures here — crisp roasted chickpeas and cabbage are folded into soft tortillas along with creamy slices of avocado and a drizzle of cashew crema spiked with lime and garlic. (via New Blooming)

15. Vegan White Pizza: No need to stick with regular ol’ red sauce pizzas when following a dairy-free diet. Topped with a garlicky cashew cream, caramelized onions and an assortment of herbs, it’s hard to stop at just one slice of this white pie. (via Delish Knowledge)

16. Chocolate Brownie Ice Cream: The best part about this ice cream? The brownie recipe required makes enough chunks to add to the churn AND still have some leftover to nibble on plain. (via Cinnamon Girl Delights)

18. Lazy Lady Blueberry Smoothie: Banana lends this superfood smoothie an added dose of creaminess, while a single date provides just a touch of sweetness. Enjoy playing around with this recipe, adding more fruit or a splash of coconut milk if you like. (via Will Frolic For Food)

19. PB Honey + Banana Popsicles: These pops remind us of frozen chocolate-covered bananas, only better, because peanut butter and honey are added to the mix. (via Lynsey Loves Food)

20. Herbed Cashew Cheese With Spicy Tomato Jam: Creamy and flavorful, this round of cashew cheese isn’t the least bit fussy. And when accompanied by cumin- and ginger-spiced tomato jam and a crusty loaf of bread, it’s sure to disappear in a flash. (via Blissful Basil)

21. Balsamic Roasted Beet + Rosemary Cashew Cheese Phyllo Tart: Tucked underneath rings of gem-tone beets, you’ll find a decadent layer of rosemary-enhanced cashew cheese. Coupled with flaky puff pastry (be sure to select one made without butter or other dairy to keep it vegan), this is one showstopper of a fall or winter tart. (via Keepin’ It Kind)

22. Bacon, Banana, Chocolate, Cashew Butter + Marshmallow Sandwich: Get this, the “bacon” bits are made from flaked coconut tossed with soy sauce, liquid smoke and maple syrup! Sweet and smokey, they are a wonderful addition to this veganized Elvis favorite. (via Lorimer Street Kitchen)

23. Creamy Vegan Corn Chowder: Put the those ears of fresh sweet corn to use in this creamy soup. Topped with crisp cornbread croutons, it’s an ideal way to celebrate the transition from summer to fall. (via Vegetarian Ventures)

What creative ways to use cashews have you tried? Let’s talk vegan cooking hacks in the comments!

From Your Site Articles
Heather Sage
Heather Sage is a gluten-free recipe developer and freelance writer living in Orlando by way of the Silicon Valley. When she isn’t playing around with alternative flours in the kitchen, she can be found tackling DIY projects around the house or exploring her neighborhood. Check out her gluten-free recipe blog, A Sage Amalgam.
Recipe Roundup
Recipes
Recipe Roundup Vegan Recipes
The Conversation
More From Recipes

8 of the Best Bento Box Lunch Ideas for Kids

15 Easy + Healthy Meal Recipes for One