We Ate Our Way Through Lollapalooza With Performer Frankie 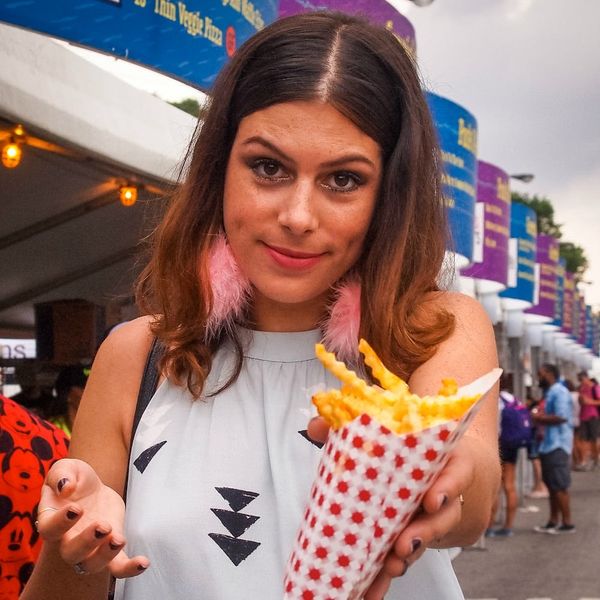 It’s just beginning to rain when we meet up with LA-based musician Frankie and her bandmates Ben Rose, Joey Orton and producer Petros Anastos-Prastacos, but that’s of no consequence to this motley crew — they’re an adventurous bunch. In fact, they stayed up until 3am the night prior catching — what else? — Pokemon galore (no word on whether they played the corresponding drinking game), and now they’re MORE than game to hit the Lollapalooza streets in search of the finest fare the fest has to offer.

“Let’s do it!,” they say in unison. Even Frankie, dressed to kill in her platform wedge heels and Wildfox two-piece crop top and pant set (chosen by her stylist Joseph Cassell — the same man who dresses Taylor Swift, but you know, NBD) isn’t concerned with getting mussed up: She’s a tomboy at heart, through and through.

“I love sneakers; I like to dress comfy,” she shares, adding that it’s not unusual for her to even borrow some style — literally — from her bandmates, in the form of a shirt or a jacket. “My name’s Frankie,” she surmises. [“It’s] a boys’ name. It’s in my blood. I just get along with guys so much better.”

It’s a good thing too, considering she’s pretty much with them 24/7, even when she’s NOT working. “They’re literally my best friends,” she says. “The label is always shocked that we vacation together… we just got back from Hawaii.”

Though the trip proved to be somewhat disastrous (Frankie landed in the ER when she mistook a popped blood vessel in her ear for swimmer’s ear and attempted to remedy the problem with a little bit of vinegar — ouch!), now here they are, at Chicago’s own four-long-day music fest, where they will take the stage not once, but twice. But not before having a bite to eat.

Though Lollapalooza is new to this fearsome foursome (Joey has actually never been to a music festival — say what!), eating on the go most definitely is not. “Oh my God, when we’re on tour, it’s so unhealthy and sporadic,” Frankie admits of her on-the-road diet. With such busy schedules, she says that dinner is usually late, and the “star of the show. [It’s] where we go crazy.” It’s a far cry from their home diets, where they’re able to cook for one another. “We’ll definitely have little potlucks,” Frankie tells us. “I’m the pasta queen. I’m a one-pot wonder… the boys are my tasters. I’m Cuban, so food equals love to us.”

Which brings us back to what we came for (ya know, other than acts such as Lana del Rey, G-Eazy, Radiohead and Halsey, all of whom the band is super stoked to see) — the FOOD. The first pick — crinkle fries from Leghorn Chicken — is kind of a no-brainer: Frankie IS, after all, known as the “French fry queen.” It’s a fact her fans know all too well. Where Katy Perry has her “Katy Kats” and Lady Gaga has her “Little Monsters” as fans, Frankie has “Frankie Fries.”

“I put it as my Twitter handle as a joke,” she explains. Now, “they tweet me pictures of them eating fries and I tweet them back.” Awwww, how cute! It’s also a safe choice for what Joey says is his fellow picky eater — in fact, the foursome scans the entire line of options before making their selections.

Joey settles on the offerings at Wao Bao (pan-seared Potstickers, anyone?) while Ben chows down on some homemade gyros on pita bread with tomato salad and tzatziki from The Purple Pig.

The band incidentally ate at the Mag Mile resto the night before, but not before enjoying other local deep dish fare from the likes of Nancy’s Pizza — a rare and much-needed break from the constant radio shows and interviews they’ve been doing in promotion of their first radio single, “New Obsession.” Not that they needed all that much help after one miss Taylor Swift tweeted her praises (and yes, for the record, Frankie is most definitely team Taylor — “I feel like I have to be or else I go to hell,” she says).

“I haven’t been home to LA for more than two days [at a time],” she tells us. “My normal is waking up in a hotel, going to two radio… interviews and then [doing a] radio show.” Not that she’s complaining. “The radio shows are so fun for us, meeting all these different artists [and] hanging out with them — it’s very cool.”

It’s certainly a reason to celebrate, which is exactly what these guys do when they join us for dessert, with a beautiful brownie sundae from Windsor Ice Cream Shoppe that they’ll surely be working off later — together, of course — in one of their infamous burpee group workouts, which also involves multi-tasking. “Frankie’s watching makeup tutorials,” Joey jokes.

Did you catch Frankie and the guys at Lollapalooza? Share with us over @BritandCo!