Open Bars Are Out. “Budtenders” Are the New Trend at Weddings 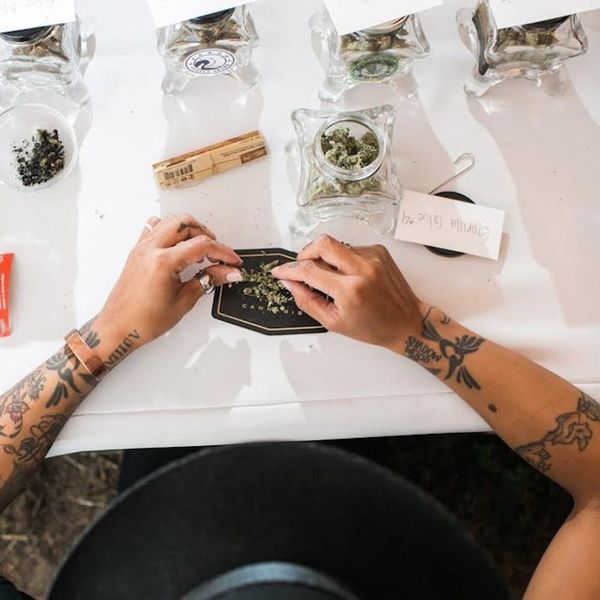 Usually one of the main perks of being a guest at a wedding (besides you know, witnessing two people form a lifetime bond) is the open bar. I mean, if you flew all the way across the country to watch your BFF walk down the aisle you should at least get a free drink or two (or five), right? But at John and Whitney’s recent Oregon wedding they ditched the unlimited cocktails for something a little more unconventional: a weed bar.

John Elledge and his now-wife, Whitney Alexander tied the knot on August 8 at a Christmas tree farm in West Linn, Oregon. Elledge is a professional cannabis cultivator so it made total sense that he wanted the herb to be incorporated into their big day. The “bud bar” had its own tent and featured 13 different strains that guests could try from Nectar PDX, a marijuana dispensary in Portland. There was even a budtender that explained the different strains to curious guests.

As of July 1 marijuana was made legal in Oregon. If you’re over 21 you can possess up to eight ounces at one time. It can’t be consumed in public, but if you’re smoking on a private property (like a Christmas tree farm) it’s totally legit.

If you are super into this idea there are a few things to keep in mind. Obviously marijuana laws vary from state to state but here’s the rundown for Oregonian affairs: If the wedding ceremony is held in a private home or property both alcohol and marijuana can both be consumed. However, weed bars are not allowed anywhere where a liquor license is required, meaning businesses that possess a liquor license (like a caterer) can’t serve where there is also a budtender. So basically, if your wedding reception is in your backyard and you want to have a budtender, that’s totally chill, but you’re going to have to recruit some friends to help you with the food. And if weed is involved it’s safe to assume that you’re probably going to need A LOT of food.

Would you ever have a budtender at your wedding? Share your thoughts with us in the comments below.