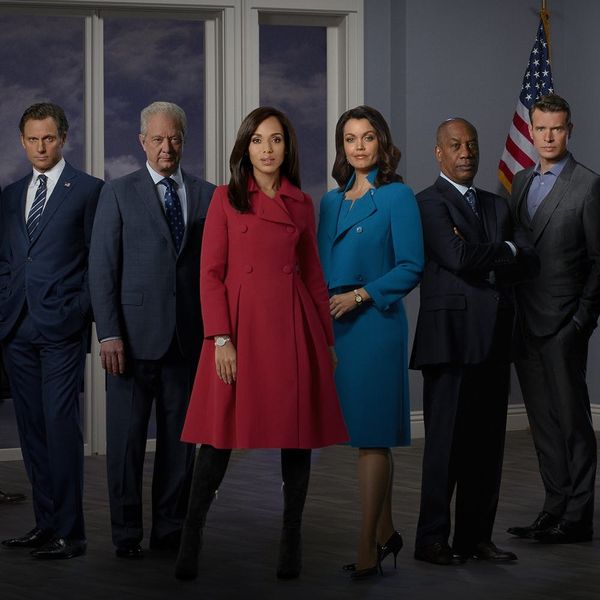 Welcome to Brit + Co’s Weekly Entertainment Planner! Each Monday, we highlight one thing we’re excited about in six categories — movies, TV, music, streaming services, podcasts, and a bonus pick from all of the above — to help you navigate your week in watching and listening. Check out our picks for the week of April 16 to 22 below. Your eyes and your ears will thank us!

I Feel Pretty (April 20): By now you’ve seen the trailer a million times: Amy Schumer plays Renée, an insecure woman who, after hitting her head hard during a spin class, wakes up seeing herself as a supermodel. Renée starts living her life with the confidence she always wished she had — and we can’t help but think she’ll learn some lessons about inner beauty along the way, too. Aidy Bryant, Busy Philipps, Michelle Williams, and Emily Ratajkowski also star. (Photo via Mark Schafer/Motion Picture Artwork/STX)

Scandal series finale (April 19): Okay, Gladiators: Are you stocked up on wine? How about tissues? After seven drama-filled seasons, the last-ever episode of Scandal will air this week, and if the goodbye video from the cast is any indication, it’s sure to be an emotional one. Farewell, Olivia Pope, and thank you for your service. Watch the series finale of Scandal on Thursday, April 19, at 10pm ET on ABC. (Photo via ABC/Bob D’Amico)

Kodachrome (April 20): If you’re looking for a feel-good flick to settle into while putting in some serious couch time next weekend, Netflix’s latest original movie Kodachrome might be just what you’re looking for. Jason Sudeikis, Ed Harris, and Elizabeth Olsen star in the film about an estranged father (Harris) and son (Sudeikis) who head out on a road trip and try to bury the hatchet before the father succumbs to his illness. All. The. Feels. Check it out on Netflix starting Friday, April 20. (Photo via Christos Kalohoridis/Netflix)

Katie’s Crib:Scandal might be coming to an end, but star Katie Lowes’ new podcast is just getting started! As the first of more promised titles on the new Shondaland podcast network, Katie’s Crib will cover all things motherhood and parenting. Each week, Lowes — a new mom herself — will be joined by a fellow mom for an honest, intimate conversation about parenting ups and downs, trials and tribulations, and expert tips and tricks. (Photo via Nicholas Hunt/Getty Images for Yahoo)

New Florence and the Machine: Florence Welch and her band return with their first new music in two years. “Sky Full of Song” is a sweeping, string-and-piano-laden ballad that puts Welch’s soul-shaking vocals front and center. It will 100 percent cure what ails you. Listen to it online now, and pick up the 7-inch single in stores on Saturday, April 21, as part of Record Store Day. (Photo via Raphael Dias/Getty Images)

Riverdale‘s musical episode (April 18): What better way to ramp up the drama (not to mention the camp) on an already-bonkers show than by recreating one of the most iconic teen horror movies ever? Archie and the gang are set to take on Broadway’s Carrie: The Musical, with performances of 11 songs and Cheryl Blossom (Madelaine Petsch) as the lead. Check it out on Wednesday, April 18, at 8pm ET on The CW. (Photo via Art Streiber/The CW)