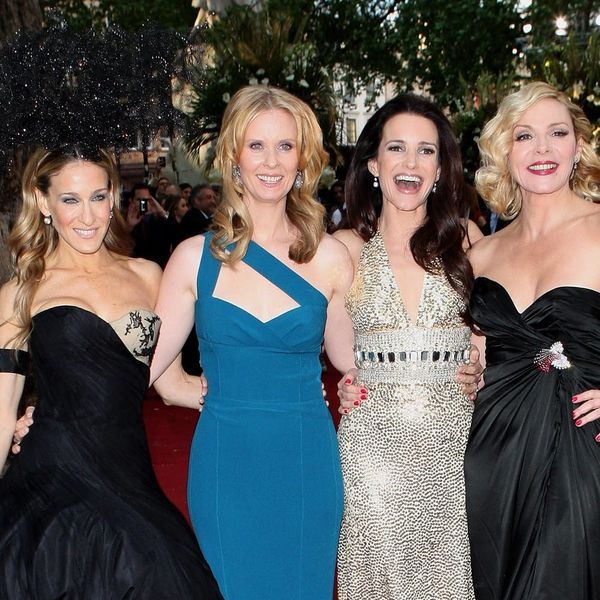 It’s been nearly 20 years since we saw the very first episode of Sex and the City (which might be getting a Samantha Jones spinoff) air, and still, we’re finding out details about the show we never knew we’d missed.

Like the fact that Sarah Jessica Parker actually found Carrie’s motivations to be somewhat “childish,” or that the show we’ve thought was scripted for so long was actually real — every last bit of it. While we knew some of the script was based on writer Candace Bushnell’s (download her app here) real-life romances (yes, Mr. Big is an actual person!), we, like the rest of America, pretty much just assumed the show’s supporting characters of Miranda, Samantha, and Charlotte and the lives they lived were a figment of her (or someone’s) imagination.

As it turns out, we couldn’t have been more wrong. Cynthia Nixon divulged in a recent interview with IMB Asks that every single wacky instance that happened on the show was the direct result of a RL experience.

“They had a rule in the writing they couldn’t put anything in an episode that didn’t happen to someone in the writer’s room or someone they knew firsthand,” she says.

They were hardcore about it too: “It couldn’t be like, any father’s brother’s sister’s shoe repair guy once heard that, you know,” she said. (We’re having flashbacks to the first ep.) “So the outlandish physical, sexual things that happened — they really did happen.”

Okayyyy, our minds? They’re kind of blown right now. That means that someone really DID get harassed by a sandwich on the daily. And someone else really DID date a guy who only wanted to do it in public. And worst of all? SOMEONE REALLY DID GET DUMPED BY A POST-IT.

But don’t expect to ever find out who — the writers have kept mum all these years, and we don’t anticipate they’ll be cracking anytime soon.

What was your fave SATC moment? Share with us over @BritandCo.

Nicole Briese
Nicole is the weekend editor for Brit + Co who loves bringing you all the latest buzz. When she's not busy typing away into the wee hours, you can usually find her canoodling with her fur babies, rooting around in a bookstore, or rocking out at a concert of some sort (Guns N' Roses forever!). Check out all her latest musings and past work at nicolebjean.com.
Books
Pop Culture
Books