Why I Gave Up My Microwave (And How You Can Too) 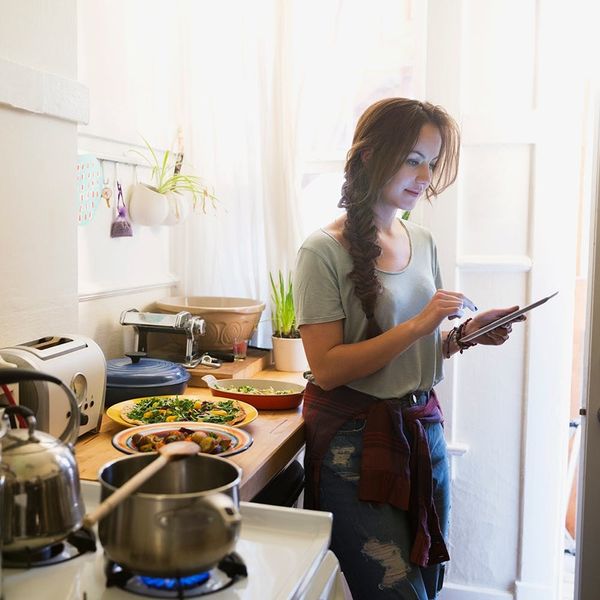 Whenever I tell people I don’t have a microwave and prefer to make my meals with the stove or oven, they look at me with confusion, exasperation, or both. Some people think that I don’t own one for environmental or health reasons. Others just don’t understand why I would give up the convenience and seem genuinely perplexed when I tell them my life has not suffered from its absence. Honestly, I don’t own or use a microwave because I prefer to cook food from scratch and think reheating it via the stove or oven tastes way better. Read on to find out just how I get by without one and you might find yourself doing the same.

It leads to more mindful eating.

I used to get home from work and act out my dinnertime routine like a zombie: pull frozen dinner from the freezer, pop in the microwave, push a few buttons, wait until hot, consume mediocre food. Having a device that prioritized quick over tasty or even healthy just wasn’t working for me. The microwave became a kind of a crutch, a tool that made it possible to excuse my way out of cooking a nutritious meal on busy days (and eventually even not-so-busy days) by virtue of its expediency. It was leading me to make poor dietary choices, and I shudder to think of how much sodium I was ingesting every day. Soon after it dawned on me that I had abandoned one of my favorite hobbies, cooking, because of the machine on the counter.

While you can zap any manner of foods in the microwave in seconds, if you’re using the stove or oven, it admittedly is going to take more time. A frozen burrito will take 30 minutes to defrost in the oven, so you might as well make a more nutritious sheet-pan meal instead. Just about any frozen meal you can buy you can make from scratch in less than an hour, and you’ll wind up with something healthier and tastier to boot.

You can actually reheat your food SO IT TASTES good.

The microwave is hands-down the worst when it comes to reheating or cooking foods that are supposed to be crispy. It sucks the moisture out of foods like pasta and casserole, leaving them tough and leathery, and liquids spatter and splutter and generally cause a mess when they’re nuked. Don’t even get us started on frozen food — the microwave is bound to leave them overcooked and lava-hot on the outside, while still somehow containing a block of ice inside.

For Crispy Foods: Use an oven or toaster oven for things like french fries, fried chicken, etc. Cook your food in a 350ºF oven until crisp and heated through, flipping once. Blot oily foods with paper towels before eating to prevent them from getting soggy.

For Leftover Pizza: Add your pizza to a skillet, then cover. Heat over medium on the stovetop until the cheese melts, then take off the lid and cook until the bottom crust is perfectly crisp.

For Pasta or Grains: Put your leftovers in a heat-safe dish, then put that dish in a steamer basket or insert in a large enough pot, cover, crank up the stove, and steam until it’s reheated throughout.

For Saucy Foods: Microwaves tend to dry out or scorch previously saucy foods like pasta or chicken and aggressively splatter soups and other liquids. Instead, try reheating your food in a covered saucepan over low heat with an added splash of water, milk, or broth. Stir occasionally and avoid the impulse to turn up the heat, or your meal might get scorched on the bottom.

It frees up precious counter space.

If you’ve ever lived with a small kitchen, you know how important counter space is — there’s nothing less pleasant than trying to juggle a cutting board of chopped vegetables, a hot pan just out of the oven, and a space for your drying rack, cookbooks, and other miscellany in so few square feet of space. Before I tossed my microwave, that was my kitchen reality. I had one tiny patch of counter that held a jar of utensils and had just enough space for a tiny cutting board, while my remaining counter space was taken up by a drying rack and, of course, my microwave.

Once I learned how to reheat food without the microwave and finally got rid of my culinary albatross, I was amazed at what a difference that extra counter space made. Cooking was so much less stressful when I wasn’t trying to play Tetris with ingredients and cutting boards every time I wanted to make a meal. Because the space my microwave was taking up was so large compared to the bare patch I had been relying on, I was even able to get a bigger cutting board, which made all of my meal prep easier.

Justina Huddleston
Justina Huddleston is a food writer living in Los Angeles. When she's not busy writing, she spends her time in the kitchen creating both virtuous and decidedly junky vegan food. Buffalo chickpea pizza, anyone? She's also been known to eat a plain block of tofu or beans straight out of the can for lunch, but somehow those culinary adventures don't make it to her Instagram. You can follow Justina on Twitter or see what's cooking in her kitchen on her blog, A Life of Little Pleasures.
Adulting
Food Adulting
Adulting
The Conversation
More From Food Adulting