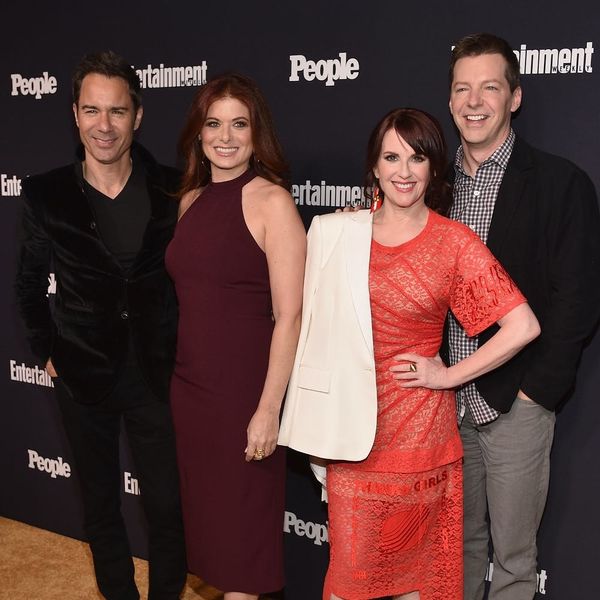 Will & Grace is coming back to TV, and we’re ready to once again embrace Karen’s snarkiness, Jack’s “Just Jack!”-ness, Grace’s neurotic ways, and Will’s biting wit (as well as his ability to *still* put up with Jack, according to the sneak peek we got at the new script). And that’s definitely a good thing, because according to the show’s newest promo, the gang is totally ready to get back into the groove.

Celebrating our nation’s independence yesterday by sharing the newest glimpse at the fab four in action, the series’ Twitter account captioned the lively promo with, “11 years and a few 🍸🍸 later, they’re back! #WillAndGrace, Thursdays this Fall on @NBC.” Woo!

While we don’t get to see any clips from the reboot — frankly, there’s no dialogue at all — this promo is all about the mooooves, giving us a look at Will, Grace, Jack, and Karen all pulling some fancy footwork. There’s no doubt that they are just as excited as we are to get back in the groove of one of our all-time favorite shows.

11 years and a few 🍸🍸 later, they're back! #WillAndGrace, Thursdays this Fall on @NBC. pic.twitter.com/lcQvNeAscv

With 12 new episodes premiering during the 2017-2018 season, Will & Grace will air Thursdays at 8pm ET on NBC, which is reason enough to break out our own fancy dance moves.

Are you excited for the return of Will & Grace (and Jack & Karen)? Let us know @BritandCo!

Desiree O
Desirée O is a ‘Professional Bohemian’ who loves anything and everything related to the arts, entertainment, and pop culture. She ADORES being a ‘Newsy’ for Brit + Co, covering all of the latest tidbits of awesomeness that you want to read about. When she’s not writing, she’s either making messy art, going on long adventurous walks with her camera, or poking around over at bohemianizm (http://www.bohemianizm.com/). You can find out about Desirée O and her work at http://DesireeO.com/ or follow her on Twitter @DesireeO.
twitter
TV
twitter