10 Romantic Winter Getaways for Your Honeymoon 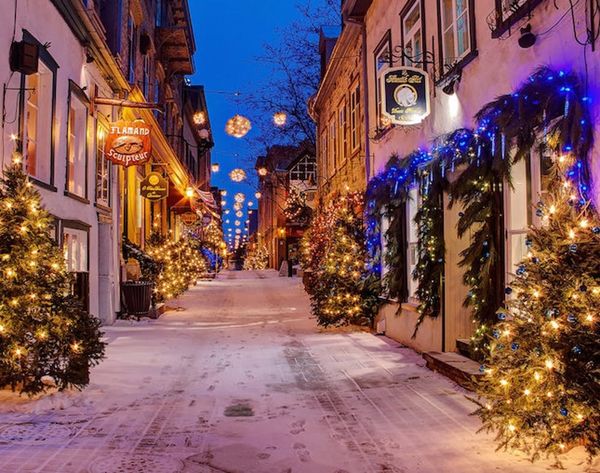 When you picture a honeymoon, chances are visions of sunny beaches and fruit-filled cocktails come to mind. The tropics are great; we can’t deny that. But why wait until summer to celebrate your new union? Embrace the winter and explore a snowy city for a trip you’ll remember forever. Whether the two of you are avid skiiers, spa-goers or hardcore adventurers, consider these 10 winter wonderlands for your romantic honeymoon.

1. Prague, Czech Republic: Is this real life or a scene from Frozen? Head over to Eastern Europe with your new spouse and aimlessly wander around this timeless, magical town. Be sure to snap a pic on the Charles Bridge (pictured above), take a tour of Prague Castle and rest your feet for a romantic dinner at Allegro, the first Prague restaurant to win a Michelin star. (image via Gallery Hip)

2. Aspen, Colorado: Head into the Rocky Mountains and spend you honeymoon at the creme de la creme of ski towns. If you’re looking for an even mix of time on the slopes and relaxing spa sessions, this is the perfect spot. The notoriously luxurious town is great for fancy candlelit dinner with your boo followed by a night on the town. If you’re looking for something a little spooky, head over to the easy-to-reach ghost town of Ashcroft, where you can wonder around what used to be Aspen’s biggest rival. (image via Michele Cardamone)

3. Zürich, Switzerland: The fairytale city of Zürich is set on the banks of both a river and a lake, with snow-topped Swiss Alps rising in the background. Head over to trendy Zürich West, a former industrial neighborhood where disused factories now host thrift stores, bars, designers’ studios and cultural spaces. Or you could just spend your entire trip on the fondue tram. We repeat: a fondue tram. Board the tram at Bellevue and enjoy dinner during a two-hour trip through the city. (image via The Arbuturian)

4. Reykjavik, Iceland: Northern lights, hot springs, glaciers… when it comes to nature, it doesn’t get much more epic that Iceland. Game of Thrones has even shot some scenes “north of the wall” here. Definitely make sure to take advantage of the endless outdoor opportunities (like our Creative Director Anj did), but there is so much to see in the nation’s capital, Reykjavik, as well. Be sure to check out City Hall, which was built right on a scenic pond to look like it’s floating, and catch a show at the recently completed Harpa Concert Hall, which is made entirely of glass.

5. Park City, Utah: For you ski-obsessed folks, Park City is one of the best snow spots in the country. School the slopes at any one of the city’s top-notch resorts and warm up in the evening with a cozy stroll along historic Main Street, which is full of delicious restaurants and charming boutiques. To give those leg muscles a break, stop by Gorgoza Park for some winter inner-tubing. If you’re a film buff, head to the city between January 16-26, when the Sundance Film Festival takes over the town. (image via National Geographic)

6. Amsterdam: The canal city is definitely chilly during the winter (speaking from experience here), but there is something about Amsterdam when it’s frosty that’s totally magical – plus hotel rates are usually cheaper during this time of year. Bundle up, grab a bike and cruise the streets. If you need to warm up, stop in at any of the city’s cozy cafes or take a boat tour of the canals (most boats are heated and covered). As far as touristy things worth doing: check out the Van Gogh Museum and take a look around the Anne Frank House. (image via Flickr)

7. Mohonk Mountain House, NY: While you might be hesitant to head to the East Coast amid all the rumors of another polar vortex, a stay at this hotel resort will have you hoping to get snowed in. The 261-room castle is a 19th-century relic that offers tower rooms featuring original Victorian woodwork, wood-burning fireplaces and balconies. Your daily room rate includes three meals plus afternoon tea and cookies. Work off some of that delicious food with ice skating, snow shoeing and cross-country skiing, all available on the grounds.

8. Old Quebec, Canada: Clustered around the city’s harbor on the banks of the St. Lawrence River are the quaint stone buildings and narrow, winding cobblestoned streets of Old Québec. Browse around the artisan shops or grab a cup of joe at one of the many charming cafes. If the weather is just too cold, splurge on a suite at the Château Frontenac, order room service and just take in the view. (image via Deviant Art)

9. Yellowstone National Park: Ninety-seven percent of the 3 million-plus annual Yellowstone visitors arrive in summer, so in the off-season, couples looking for seclusion can pretty much have this 2,219,789-acre park to themselves. Take advantage of all that space by renting snowmobiles to explore the steaming geyser basins and incomparable wildlife viewing. (image via Yellowstone National Park Tours)

10. Antarctica: And finally, for you true adventures out there, head to Antarctica for the most epic of honeymoons. White Desert, a company that guides luxury treks through the Antarctic interior, takes guests out from November through January for a whopping $25,455 per person all-inclusive. You’ll be guided through all the must-do Antarctic experiences, from kite skiing to ice climbing to visiting the 8,000 emperor penguins that colonize the nearby Ekström Ice Shelf. It’s not cheap by any means, but it’s definitely the trip of the lifetime. (image via Wiki Commons)

Are you planning a snowy honeymoon? Where are you and your SO headed? Share with us in the comments below.

From Your Site Articles
Cortney Clift
Cortney is the senior writer and special projects editor at Brit + Co. She typically covers topics related to women's issues, politics, and lifestyle. When she's not buried behind her computer you'll find her exploring New York City or planning her next big adventure.
Home News