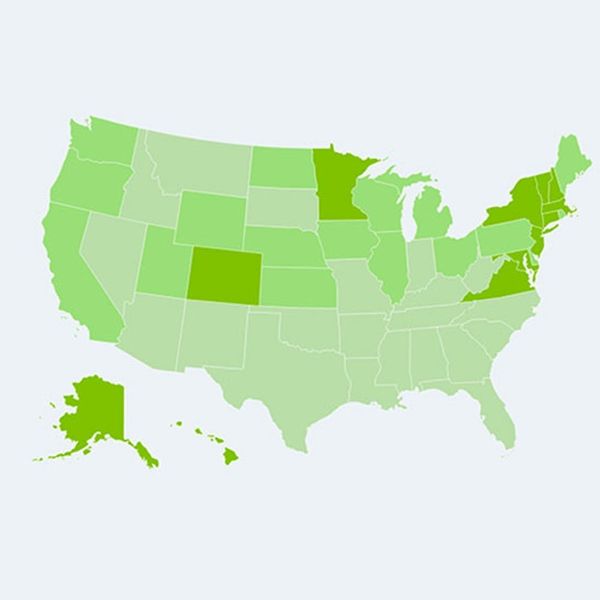 We’re guessing by now the issue of the gender wage gap has probably been brought to your attention. It’s been a hot topic in the media (remember that Meredith Vieira and Stacey Dash debate?) and one Philadelphia resident has even opened up a pop-up shop where women don’t have to pay as an innovative tactic to help shed light on the issue. Snowballing off of all this attention to women’s equality, The Institute for Women’s Policy Research has recently released an in-depth study titled “The Status of Women” — and, ladies, fellas, this one’s a must-click.

The interactive website displays various women’s stats like employment + earnings, reproductive rights, health + well-being and political participation in different locations across the country. When you visit the site, you’ll find color coded US maps displaying the highest and lowest ranked states in each category. Hover over a particular state and you’ll see a ranking out of 51 (DC is included) as well as a letter grade.

The best/worst states vary depending on the categorical breakdowns, but when it comes to employment + earnings, the District of Columbia came out on top. Women in DC make an average of $60K per year (the male average in $69K). That might not sound great (and, yup, it is not) but that’s an average of women earning about 87% as much as men — one of the smallest wage gaps in the U.S. Maryland (the #2 state in employment + earnings) actually has a slightly smaller wage gap (there women earn 87.4% as much as men) but their overall income is less. While $60K is a reasonable income for most, that wage gap percentage is still less than impressive. And the fact that Maryland’s 87.4% is the closest the country can come to providing equal pay doesn’t make things better.

While most East Coast states scored relatively high across multiple categories, a large portion of southern states didn’t fare so well. Mississippi was one area that came out with shockingly poor results. The Status of Women gave the state an “F” in employment + earnings, poverty + opportunity and health + well-being. Its best score was a “C-” in reproductive rights. A few other places that fell toward the bottom were neighboring states: Louisiana and Arkansas – both of which featured a median wage gap of 70.9%.

On a national level, the study reveals that at the current rate, women will not receive equal pay until 2058. To put that into perspective, if you’re in your early 20’s now, you’ll likely be retired by then. The study goes on to highlight a few major millennial statistics on a special page where they claim the median annual earnings for a woman age 16-34 in a full-time role is approximately $30,000. They found that the majority of female millennials are leaving college with about $28,400 of debt. So realistically, all those grads heading out into the real world this month are probably only going to be making about $1,600 more per year than their total loan amount. Yikes. It was also noted that millennial women experience depression 15.7 more days a year than men – given all this new info, we can’t say that’s a total shocker.

We know we’ve thrown a whole lot of scary facts your way, but this is just the tip of the iceberg. To see more specific stats for your area, head on over to Status of Women’s website to select your location and take a closer look at where exactly your state excels and where it has room for improvement. And may we recommend visiting our friends at Levo League’s #Ask4More campaign right now?

(Photos via Status of Women)

What stats shocked you most about this study? Share with us in the comments below.

Cortney Clift
Cortney is the senior writer and special projects editor at Brit + Co. She typically covers topics related to women's issues, politics, and lifestyle. When she's not buried behind her computer you'll find her exploring New York City or planning her next big adventure.
Feminism
Home News
Feminism