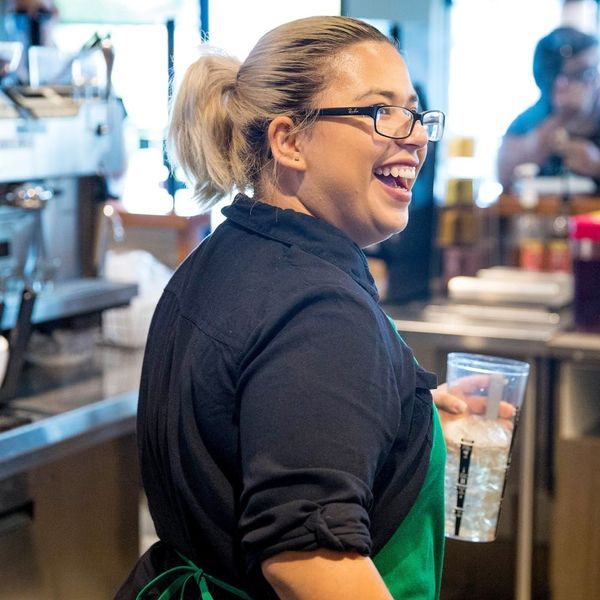 We’ve been seeing some SERIOUSLY positive things in our newsfeeds today: From New York’s new regulation to continue free birth control to the 500 women who signed up to train to run for office following yesterday’s marches, it feels like one big continuation of yesterday’s insane lovefest.

Now, Starbucks is giving us yet ANOTHER reason to smile (in addition to its Cascara Latte, which, may we say, just may be our favorite yet — less sweet!). The megachain has announced that, as of October 1, non-store, corporate employees seeking maternity leave that work 20 hours a week or more can look forward to not only the six weeks off they currently have at 67 percent of their usual pay (federal law mandates a total of 12 weeks unpaid), but 18 weeks off at 100 percent. Whoa.

What’s more, they can choose to extend that time by an additional 12 weeks, though that time would be unpaid.

And what about the men or non-birth mothers of non-store employees, you ask? (This week is all about gender equality, after all.) They’re eligible to take up to 12 weeks of paid leave — even as adopted parents.

Store employees will also receive greater benefits — they’ll now receive their six weeks at 100 percent paid versus the previous 67 percent, with the option to take 12 weeks of additional unpaid leave, with non-birth partners offered up to 12 weeks of unpaid leave.

Dang! No wonder it’s been previously named one of the top 100 companies people want to work for!

What do you think of Starbucks’ new parental policy? Tell us @BritandCo.

Editor’s note: An earlier version of this post stated the new policy would be effective for all Starbucks employees. These benefits will be available to non-store corporate employees, although greater benefits will exist for current store employees as well. The post has been updated, and we regret the error!

Nicole Briese
Nicole is the weekend editor for Brit + Co who loves bringing you all the latest buzz. When she's not busy typing away into the wee hours, you can usually find her canoodling with her fur babies, rooting around in a bookstore, or rocking out at a concert of some sort (Guns N' Roses forever!). Check out all her latest musings and past work at nicolebjean.com.
maternity
Food News
maternity New Moms Parenting Starbucks
The Conversation
More From Food News