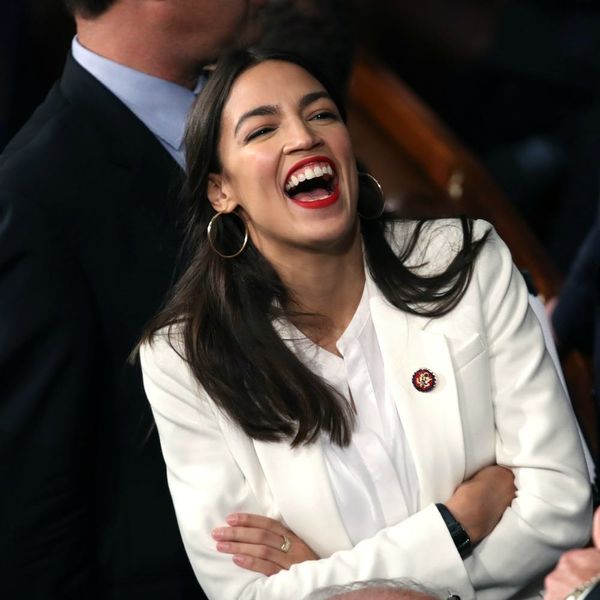 As over 100 women were sworn in during the Thursday, January historic opening of the 116th Congress, the sartorial choices of the diverse group of women in the House of Representatives were not only on point, but also symbolic.

Alongside Muslim-Americans Rashida Tlaib, who opted to wear the traditional dress of her family’s native Palestine, and Minnesota’s Ilhan Omar, who marked her arrival as Congress’ first Hijabi in office, New Mexico’s Deb Haaland wore her Pueblo tribe’s regalia to swear her oath of office, and New York’s Alexandria Ocasio-Cortez made her own historic statement by arriving in a white pantsuit reminiscent of suffragettes. The choice was no doubt a nod to the suits worn by historic political women like Hillary Clinton and Shirley Chisholm.

White was first adopted by women’s rights advocates in 1908 as one of three colors used symbolically by the Suffragette movement. Emmeline Pethick-Lawrence, honorary treasurer of the Women’s Social and Political Union (WSPU) in England, adopted white, purple, and green as the symbols of purity, dignity, and hope, respectively. Since then, the colors have been worn by women breaking barriers throughout history.

When she was elected as the first Black woman in Congress, Shirley Chisholm wore a white suit, which she donned again during her presidential bid a few years later. And as the first woman presidential nominee for a major political party, Hillary Clinton wore a white pantsuit during one of her several debates with now-president Donald Trump, signaling her continued commitment to enriching women’s rights and equality. (When she conceded, Clinton wore a dignified purple suit.)

Ocasio-Cortez has already faced scrutiny for her clothing choices, but so far, the youngest woman ever in Congress has taken criticism in stride. “If I walked into Congress wearing a sack, they would laugh & take a picture of my backside,” Ocasio-Cortez tweeted in November after being chided for wearing what one conservative pundit deemed an expensive jacket. “If I walk in with my best sale-rack clothes, they laugh & take a picture of my backside. Dark hates light – that’s why you tune it out. Shine bright & keep it pushing.”