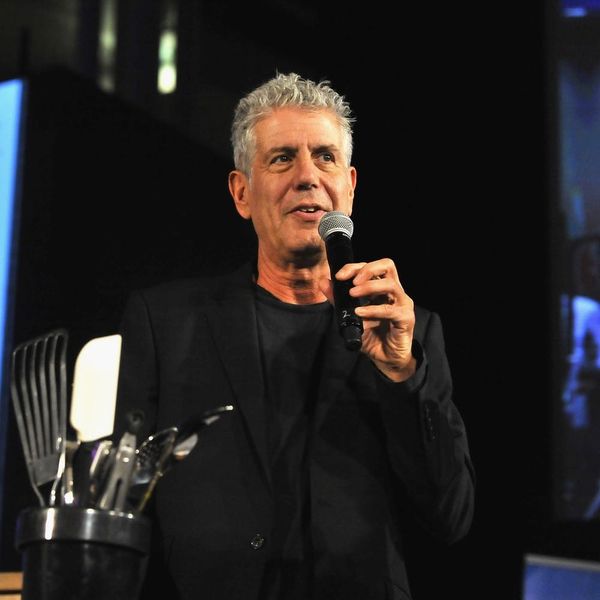 Celebrity chef Anthony Bourdain was found dead in his hotel room in France on Friday, June 8, leaving colleagues, friends, and admirers shocked and grieving. In the hours after CNN confirmed the news, many took to social media to share their sorrow while lauding his work as a storyteller, food critic, and cultural reporter.

Through his best-selling book Kitchen Confidential: Adventures in the Culinary Underbelly and almost two decades as a revered food and travel TV host, Bourdain not only entertained, but also taught many people about culinary and culture around the globe. Several celebrities thanked the chef for bringing the world into their homes through that common passion point — food.

Anthony. One of my idols. Unapologetic, passionate and one of the best storytellers on the planet. Thank you for making food so exciting. And always standing up for everything right. Horrible. Why why why. Be at peace now :(

Bourdain's exceptional writing made this one formerly picky, fearful eater very brave and want to try everything and I'll always be grateful for him and the worlds he opened

Stunned and saddened by the loss of Anthony Bourdain. He brought the world into our homes and inspired so many people to explore cultures and cities through their food. Remember that help is a phone call away US:1-800-273-TALK UK: 116 123

Anthony Bourdain gave us the world. There was nothing else like him on TV. His wasn’t just some travel show. It was food, culture, politics, complexity. And his irascible, unique personality and total openness perfected it. How awful that he was in so much pain while feeding us.

Others pointed out the important work he did to elevate voices and perspectives too often ignored within the food industry and beyond.

Anthony was a major MeToo supporter. He strongly defended our rights; he spoke up publicly for us. He was that vital male partner. I am humbled and forever grateful that one of his last major projects was believing in and becoming EP of my recent CNN series on the lives of women.

I’m having a hard time wrapping my head around the news about Anthony Bourdain. Parts Unknown told such wonderful, respectful, authentic stories about peoples we never hear about in the US in his unique voice. He seemed to really live through and with them. RIP Chef.

Bourdain was in France filming for Parts Unknown when French chef and close friend Eric Ripert reportedly found him unresponsive in his hotel room on Friday morning. CNN said in a statement that Bourdain died of suicide. In the wake of his death, many on Twitter have spoken about the importance of resources for those who are struggling, reminding people that help is available if they are able to reach out for it, and nudging others to offer support to loved ones.

Truly devastated about @Bourdain. I have no words. Please if you need help, reach out. Call the National Suicide Prevention Lifeline at 1-800-273-8255

Oh my God @Bourdain has taken his life. People are in unmanageable pain. This is my wake up call today. We have to help those who cannot help themselves.

And some also sent their condolences to Bourdain’s friends and family.

I am shocked and deeply saddened. RIP to a father, partner, chef, writer, and incredibly talented man. @Bourdain ❤️ Prayers for his loved ones.

Heartbroken over Anthony Bourdain. He was a kind person. This world doesn’t make sense today.

My heart is broken for my sweet friend @AsiaArgento. … Anthony Bourdain💔

Argento herself posted a heartfelt note about her partner’s passing.