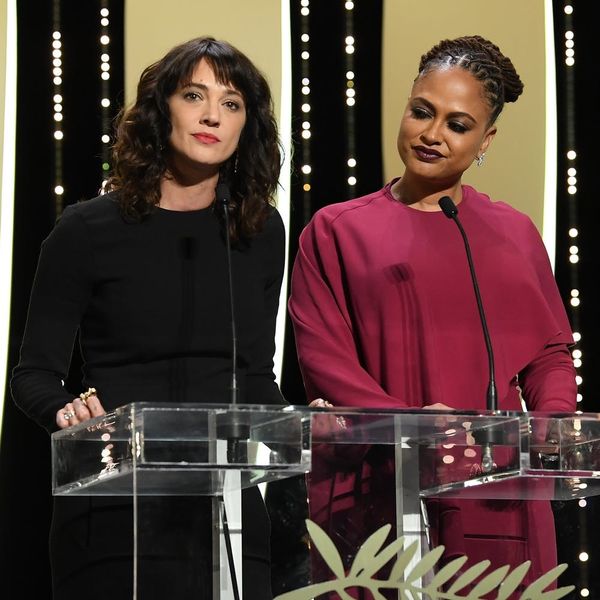 After publicly accusing Harvey Weinstein of rape last year, Italian actor Asia Argento made a strong statement about abuse in front of her peers this weekend at the close of the Cannes Film Festival. Standing beside celebrated director Ava DuVernay, Argento took the festival — and some attendees — to task for enabling Weinstein’s alleged abuse of women over the years.

Notably, Argento called out people who were in the room at Cannes (though she didn’t name names). “Even tonight, sitting among you, there are those who still have to be held accountable for their conduct against women, for behavior that does not belong in this industry, does not belong in any industry or workplace,” she admonished. “You know who you are.”

Argento posted a portion of her speech to her Twitter account on Sunday night. The section she posted reads:

In 1997 I was raped by Harvey Weinstein here at Cannes. I was 21 years old. This festival was his hunting ground. I want to make a prediction: Harvey Weinstein will never be welcomed here ever again. He will live in disgrace, shunned by a film community that once embraced him and covered up for his crimes. Even tonight, sitting among you, there are those who still have to be held accountable for their conduct against women, for behavior that does not belong in this industry, does not belong in any industry or workplace. You know who you are. But most importantly, we know who you are. And we’re not going to allow you to get away with it any longer.

Argento also took NBC to task following her remarks. NBC infamously killed the story that initially exposed the allegations against Weinstein, which writer Ronan Farrow would then take to the New Yorker magazine. When NBC News reported on Argento’s speech, Argento fired back in a tweet, “Note to @NBCNews: perhaps you should be investigating why NBC news shut down @RonanFarrow’s story, in spite of overwhelming evidence.”

Note to @NBCNews: perhaps you should be investigating why NBC news shut down @RonanFarrow’s story, in spite of overwhelming evidence. pic.twitter.com/Z363NeXzKZ

Following her speech, other women in Hollywood, including Mia Farrow and Jessica Chastain, expressed their support for Argento online.

Truth to power – this is exactly how to do it.

Well- I was cheering!! Millions were!!! Xxxxx

Since last year, Weinstein has been accused of assault or other sexual abuse by more than 50 women. Argento and actor Rose McGowan were among the first to publicly name Weinstein as an abuser, and others including Gwyneth Paltrow, Uma Thurman, and Angelina Jolie later came forward.

Weinstein has so far been shunned from Hollywood. He is also facing criminal charges for his alleged abuse of women. If Argento and other women in Hollywood who have supported the resurgence of #MeToo and launched TIMES UP have anything to say about it, it is likely that Weinstein will never be welcome again at Cannes.