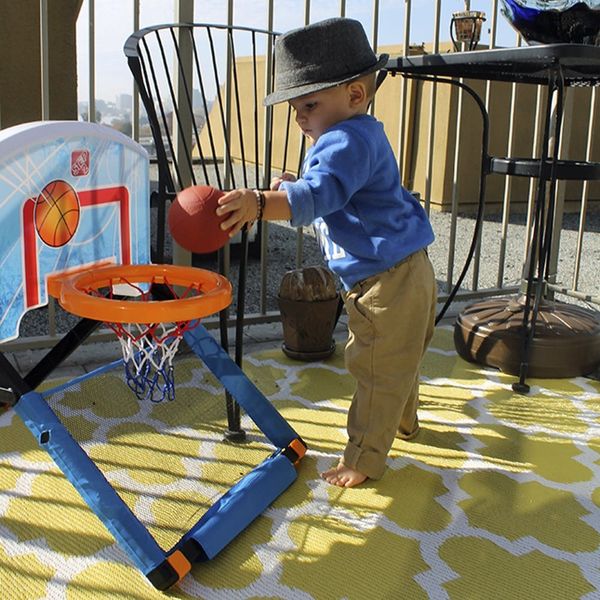 Understatement of the year: Professional athletes are inspiring. They’re the best of the best, embodying strength, ambition, integrity and hustle — and who doesn’t hope to see those characteristics in their own children? Sure, you proably don’t want to project a future career onto your kid, but we don’t think there’s anything wrong with drawing inspiration from the pros when it comes to choosing a name. Prep for filling out your baby-naming bracket by scrolling through to our top-seeded picks.

1 + 2. Venus or Serena (Williams): Either of these names would be a grand slam for a little girl. (Photo via Graham Denholm/Getty Images)

4. Dara (Torres): If you’re looking for a unisex name, Dara is a great option. It’s not only the name of one of our favorite Olympic swimmers, but it also can go by the Irish spelling “Darragh” for a boy. (Photo via Bob Levey/Getty Images)

5. Ronda (Rousey): Not too long ago, Ronda would’ve sounded old-fashioned, but ever since this mixed martial artist started making headlines, we think this name totally kicks butt. (Photo via Frazer Harrison/Getty Images)

6. Mia (Hamm): One of the most popular US soccer stars also bears the sixth most popular girl’s name of 2014. If you want something less trendy, opt for Mia’s gorgeous given name, Mariel. (Photo via A. Messerschmidt/Getty Images)

8. Lolo (Jones): Don’t worry if you’re not sure about actually putting Lolo on the birth certificate. It’s just a nickname for the track and field and bobsledding star, whose given name is Lori. (Photo via Scott Halleran/Getty Images)

9. Diana (Taurasi): We predict that this name is going to gain popularity again thanks to the royal baby, but it also belongs to one of the top 15 WNBA players of all time. Not too shabby. (Photo via Christian Petersen/Getty Images)

10. Martina (Navratilova): One of the greatest tennis players ever has a beautiful, feminine name, so we were surprised to learn that it means “warlike.” You’ll want this name for a girl who’s gonna kick ass and take names. (Photo via Graham Denholm/Getty Images)

11. Steffi (Graf): The tennis legend’s full name, Stefanie, is the German variation of Stephanie. We love that this sweet nickname stuck. (Photo via Markus Hibbeler/Getty Images)

12. Nadia (Comăneci): Meaning “hope,” Nadia is a name you probably know best thanks to this famous Romanian gymnast. It’s not hugely popular these days, so it’s a great blend of familiar and uncommon. We give it a perfect 10. (Photo via Tony Duffy/Allsport)

13. Misty (May-Treanor): Three Olympic gold medals and 112 individual championships went to this beach volleyball superstar. We think the future will hold plenty of other treasures for your little Misty. (Photo via Ryan Pierse/Getty Images)

14. Annika (Sörenstam): Are you considering naming her Anna, but worried it’s just too common? Try the Swedish diminutive instead, made famous by the world’s best female golfer. (Photo via A. Messerschmidt/Getty Images)

15. Gabrielle (Douglas): Who didn’t fall in love with gymnast Gabby during the 2012 Olympics? Fall in love with the name all over again, because it also happens to be très français. (Photo via Michael Regan/Getty Images)

1. Peyton (Manning): The elder Manning quarterback has the more modern name, which has been popular for both boys and girls over the last decade. (Photo via Justin Edmonds/Getty Images)

2. Kobe (Bryant): It turns out that Kobe’s parents named him after the Japanese steak of the same name when they saw it on a menu. At least your kid can say he was named after a five-time NBA champion and all-star instead. (Photo via Kevin C. Cox/Getty Images)

4. Lionel (Messi): Ever Ronaldo’s rival, Messi’s first name is also a strong contender in the baby naming game. It means “young lion,” which would make it a good complement if you already have a Leo somewhere in the family. (Photo via Alex Caparros/Getty Images)

5. Rory (McIlroy): If you’d like a traditional Irish name that’s less common than Liam, but easier to pronounce than, say, Fiachra, we suggest borrowing from this celebrated golfer. (Photo via David Cannon/Getty Images)

6. Hank (Aaron): This man is legen — wait for it — dary, and your son will be too when he bears this name. To make it modern, don’t make Hank a nickname for Henry. (Photo via Kevin C. Cox/Getty Images)

7. Mickey (Mantle): Okay, this one is going to be a tough sell if all you think of is the House of Mouse. But your kid will be in excellent company, including this Hall of Famer, Mickey Rourke and Mickey Rooney. (Photo via the National Baseball Hall of Fame Library)

8. Manny (Pacquiao): His match against Mayweather was billed as the Fight of the Century, but we’re much more interested in stealing his name, Emmanuel. (Photo via Chris Hyde/Getty Images)

10. Wayne (Gretzky): The hockey legend is known as “The Great One,” which pretty much sums up what we think of this less common name. (Photo via Dave Sandford/Getty Images)

11. Usain (Bolt): It’s gonna be hard to beat such a spot-on name (he IS the fastest man in the world, after all), but we think Usain is an excellent name to borrow, especially since it means “beautiful.” (Photo via Paul Gilham/Getty Images)

12. LeBron (James): If anyone ever accuses you of stealing this name from King James, you can just turn around and tell them that it’s actually French for “the brunette.” So there! (Photo via Jason Miller/Getty Images)

13. Blake (Griffin): Obviously we love the name Blake for girls, but we also think it’s an underused name for boys. Not for nothing, his last name is pretty awesome too. (Photo via Stephen Dunn/Getty Images)

14. Jerry (Rice): This name has declined in popularity over the years, but we think it’s time to bring it back. After all, it’s shared by one of the best football players of all time. (Photo via Thearon W. Henderson/Getty Images)

15. Michael (Jordan): For when your kid wants to be like Mike and you want to keep it traditional, go with the first name. For a stronger hat tip to the NBA’s best, go for Jordan. (Photo via John Gichigi/Getty Images)

Have you or would you name your child after an athlete? Tell us your favorite pro names in the comments!

Molly Griffin
Molly is a writer and editor from Boston who loves traveling, eating and occasionally being a little too candid. She lived in Dublin, Ireland for the last four years but recently moved to San Francisco to escape the rain. Now, she’s on the lookout for a good proper pub.
Baby Names