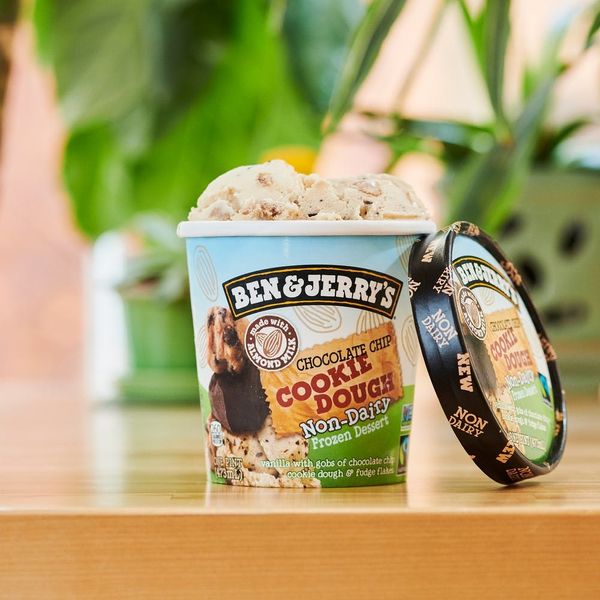 Before you subject your tastebuds to the weird and wonderful new foods and drinks going viral on Instagram, check out Brit + Co’s reviews on First Bite, our series where we tell you if they are truly snack-tastic or totally terrible.

It’s been quite a year of incredible innovations from Ben & Jerry’s, most of which are cookie-dough centric. Only a few weeks ago, the Vermont-based brand released a line of Cookie Dough Core ice creams, and who can forget the Snackable Dough Chunks from the fall? However, Ben & Jerry’s just announced it is finally adding a Non-Dairy Chocolate Chip Cookie Dough Frozen Dessert ($6) to its line-up, and this may be the most exciting news yet. Ben & Jerry’s claims its cookie dough is “the number one global flavor,” so it only makes sense that they would offer a vegan variety. We had a chance to try a first scoop along with another non-dairy release: Chocolate Caramel Cluster ($6). Here’s what we thought and more importantly which one we would buy.

Unlike many non-dairy frozen desserts on the market, Ben & Jerry’s entire line of 11 vegan “ice creams” are made up of an almond milk and pea protein base. The cookie dough pint features vanilla base with “gobs of chocolate chip cookie dough and fudge flakes.” It scoops out just like standard ice cream — the frozen dessert isn’t icy or rock-hard like some non-dairy alternatives can be. It looks similar to the dairy-based cookie dough ice cream, but the big difference is the chocolate. It comes in flakes as opposed to rectangular chunks.

One bite and your tastebuds will nearly be fooled by the creaminess and richness, however due to the almond base, this product does have a faint nutty finish, almost like almond meal. It’s more almond-y than vanilla-y so it isn’t quite like its classic flavor. The cookie dough itself comes in big “gobs” as promised, which is satisfying, however we wished there was just a tad more crunchy contrast, as found in the OG pint with the chocolate chips and chunks. Despite our tiny complaints, Ben & Jerry’s does a pretty good job of pulling off a vegan cookie dough frozen dessert. If you have dietary restrictions, you’ll love this pint. If not, you may want to just stick to the original.

The new Chocolate Caramel Cluster stars a chocolate almond milk/pea protein base with roasted peanuts, fudge chunks, and salted caramel swirls. Similar to the Cookie Dough pint, the chocolate frozen dessert scoops out effortlessly to reveal all sorts of buried treasure (in the form of oozy caramel ribbons and peanuts). It really does taste exactly like B&J’s chocolate ice cream, and you won’t be able to tell it’s vegan. Beyond the tastiness of the base, the mix-ins are on-point. The salty caramel makes every bite spark, and the nuts offer plenty of crunch and flavor. Though this may be the type of pint you might pass up in favor of a more well-known flavor like Cookie Dough or Cherry Garcia, we recommend trying it at least once. We will certainly purchase this pint again.